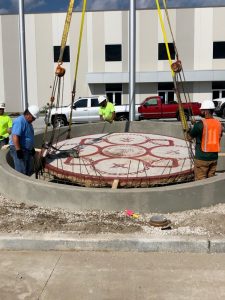 Measuring 13 feet in diameter, Local 562’s logo will be the centerpiece of a monument at the new training center at 3755 Corporate Trail.  The training center will open this summer.

“It was created and placed at the bottom of pool at our old headquarters on Larimore Road around 1970 to remind our members and their families that they belong to something special,” said John O’Mara, business manager, Plumbers and Pipefitters Local 562.  “The pool itself was pretty unique.  It was built as a recognition of our union member’s hard work during the week, giving them a place for their families to rest, relax and be with friends.”

O’Mara said that about 15 years ago the pool was going to be filled in, but union members wanted to preserve the iconic logo.  It was extracted from the pool and later placed near the first tee at the union’s Emerald Green golf course.  When the long time headquarters at 12385 Larimore Road in Spanish Lake, Mo. was sold in 2017, the logo was placed in storage.

“As we train the next generation of Local 562 craft workers in new technologies in our industry, we also want to remind them of the generations of our workers who have help build the foundation of commercial, residential and industrial projects that sustain us today,” said O’Mara.  “The newly placed logo is also a reminder of our successes and sacrifices that have improved the rights of workers and delivered greater prosperity for families.”