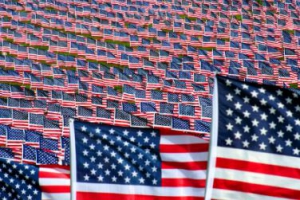 Nearly 7,000 flags will be on display at Art Hill in St. Louis to honor American military heroes on September 11th, 2016, reports https://flagsofvalorusa.com.

On September 11th 2016, America’s Heartland Remembers (AHR) will fill Art Hill – the iconic St. Louis destination in Forest Park – with nearly 7,000 American Flags. This awe-inspiring display, which will be known as “Flags of Valor” will pay tribute to the brave men and women who made the ultimate sacrifice while fighting the War on Terror since September 11th, 2001 to keep citizens free and safe here at home.

Each and every flag in the War memorial will bear the name and photo of a hero who bravely served their country but never came home. The flags will be placed in chronological order according to the date each of the Veterans lost their livesand will allow loved ones and visitors to walk through the massive display so they can easily find and honor each hero.

AHR wants to ensure Gold Star Families have the opportunity to bring their Hero’s flag home. Family members can acquire their Hero’s flag at a reduced rate by visiting flagsofvalorusa.com. Here, they can also search for the location of their Hero’s flag on the Art Hill prior to the September 11th weekend event. AHR implores everyone to share this website and news of the event with other military family and friends who may wish to attend or contribute. Additionally, members of the general public can sponsor a flag for a Gold Star Family, as well as acquire an unclaimed flag for a small donation.

Apart from helping America’s Heartland Remembers fund two memorials for a fallen New York firefighter and a Marine from Iowa, all profits from the event will be donated to one of the following not-for-profit organizations that are closely aligned with the mission of America’s Heartland Remembers: Missouri Military Memorial Foundation, Semper Fi Fund, Missouri Memorial Military Foundation, and The Greater St. Louis Honor Flight.

In an effort to never forget those who perished on September 11th 2001, Pace Properties and America’s Heartland Remembers organized a flag tribute to each of the Heroes who were lost in the attacks at on our homeland that fateful day. Hundreds of volunteers gather to assemble and erect the massive display of flags on Art Hill in Forest Park. As a 501(c)(3) organization, AHR has given to countless organizations that help Military and their families. In addition, they have erected hundreds of Flag displays at Veterans funerals and worked with families of the fallen to create lasting tributes to their heroes.