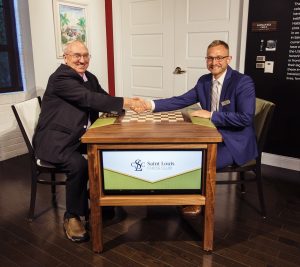 Saint James, MO, August 27, 2019–Cohen Architectural Woodworking announces Nate Cohen, chief financial officer and professional woodworker, has designed and built innovative chess tables for the two major Grand Chess Tour events to be held in St. Louis, MO. The tables incorporate a fully computerized chess board to monitor player’s moves and scores. They were unveiled as part of a special ceremony held August 9, 2019 at the World Chess Hall of Fame, (WCHOF) as seen by an online worldwide audience.

The tables were formally introduced at the 2019 Saint Louis Rapid & Blitz and the 2019 Sinquefield Cup. Both events feature the top chess players in the world, including Magnus Carlsen and Fabiano Caruana, and are being held at the Saint Louis Chess Club through August 29, 2019. The tables will also be used in future championship events.

Cohen’s design is inspired by a Cuban chess table used by Bobby Fischer in Havana in 1966, which is now part of the WCHOF’s permanent collection. The tables feature green padding and display screens with the latest electronic equipment inlaid.

The tables were commissioned by Rex Sinquefield, founder and president of the Saint Louis Chess Club and host of several Grand Chess Tour events. Entitled the “Sinquefield Table,” Cohen has been designing and building tables for the Chess Club since its founding in 2008.

“We should actually be calling these the Nate Cohen Tables,” Sinquefield said. “He has won three international competitions for woodworking.  He is an incredible expert. We have been working with Nate for 11 years and when we needed some new tables for these championships. I had the Cuban table in mind that was used in the 1960s. We asked Nate if he could do it and he said yes, and now we have the beautiful finished product.”

“I am grateful to Rex and his wife, Dr. Jeanne Sinquefield, for this special opportunity, and to be a part of this growing chess family. Our team is excited to be providing the tables for these world class events. It is a great privilege to have an impact on the game of chess as its popularity grows in St. Louis and on a world-wide basis,” Cohen said.