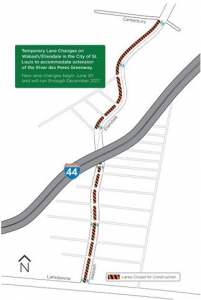 Temporary Lane Changes to shift on Wabash/Ellendale in the City of St. Louis for next phase of the Greenway Construction

On June 30th, temporary lane changes on Wabash/Ellendale in the City of St. Louis will shift again to accommodate the next phase of the River des Peres Greenway construction. The paved greenway – designed for walking, running and riding bikes – is being built parallel to the southbound lanes of Wabash/ Ellendale Avenues (which is the same street that changes names) between Lansdowne and Canterbury Avenues in the City of St. Louis.

“This traffic shift will introduce southbound travelers to the first phase of the permanent changes that will be made to the roadway—the reduction of one southbound lane from Lansdowne to Canterbury, parallel to the new greenway,” says Angelica Gutierrez, Great Rivers Greenway Project Manager.  “It will also show people who use this roadway how a single, narrowed lane calms traffic and makes it easier for those who are walking, pushing a stroller or using a wheelchair to cross the street.”

Construction will continue to be staggered to ensure vehicle traffic remains open in both directions at all times. Any driveways or side streets that intersect with the new greenway will be constructed one half side at a time to ensure access for residents and property owners. Project partners will also work closely with the construction team to minimize inconvenience to neighborhood residents and roadway users.

“As this traffic shift takes effect, we remind drivers to use caution as they adjust to the narrowed southbound lane on Wabash,” says Deanna Venker, Traffic Commissioner for the City of St. Louis. “We also remind people to adhere to the 25-mile-per-hour speed limit in the construction zone for the safety of everyone working and traveling in this area.”

This phase of the project to extend the River des Peres Greenway 1.8 miles north from Lansdowne to Francis R. Slay Park in St. Louis City is a partnership between Great Rivers Greenway, the City of St. Louis and the Missouri Department of Transportation. The goals of the project include expanded walking and biking connections to residential neighborhoods, business districts, MetroLink and MetroBus, as well as traffic calming to increase safety for everyone who uses the roadway.

Permanent changes to the roadway include the reduction of one southbound lane from Lansdowne to Canterbury, parallel to the new greenway. Both northbound lanes will remain. Other improvements include roadway resurfacing, new lighting, enhanced drainage and low maintenance, native landscaping.

Construction is expected to last through December 2017.

Great Rivers Greenway is a regional greenway district created by a vote of the people in St. Louis City, St. Louis County and St. Charles County.