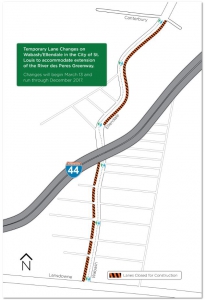 Construction to extend the River Des Peres Greenway 1.8 miles north from Lansdowne to Francis R. Slay Park is scheduled to begin Monday, March 13. The paved, separated greenway for walking, running and riding bikes is being built parallel to the southbound lanes of Wabash and Ellendale Avenues (which is the same street that changes names) between Lansdowne and Canterbury Avenues in the City of St. Louis.

On Monday, March 13, traffic on Wabash/Ellendale will be reduced to one northbound lane and one southbound lane between Lansdowne and Canterbury. Construction will be staged to ensure vehicle traffic will remain open in both directions at all times. Any driveways or side streets that intersect with the new greenway will be constructed one half side at a time to ensure access for residents and property owners.

“We want to make sure people who drive or ride bikes on Wabash and Ellendale are aware of these temporary lane changes necessary to accommodate the expansion of the greenway,” says Angelica Gutierrez, Great Rivers Greenway Project Manager. “We are working closely with our partners and construction team to minimize inconvenience to neighborhood residents and others who use this roadway so we can expand this greenway for all to enjoy.”

“There will be no loss of street parking on Wabash, but parking will be intermittent as construction progresses,” says Deanna Venker, Traffic Commissioner for the City of St. Louis. “Residents and visitors will be able to park on side streets and we will ensure walking access is maintained, with minimal detours throughout construction.”

This phase of the River des Peres Greenway expansion is a partnership between Great Rivers Greenway, the City of St. Louis and the Missouri Department of Transportation. Goals of the project include expanded walking and biking connections to residential neighborhoods, business districts, MetroLink and MetroBus, as well as traffic calming to increase safety for everyone who uses the roadway.

Permanent changes to the roadway include the reduction of one southbound lane from Lansdowne to Canterbury, parallel to the new greenway. Both northbound lanes will remain. Other improvements include roadway resurfacing, new lighting, enhanced drainage and low maintenance, native landscaping.

“When the greenway is finished, people will be able to walk, ride a bike, push a stroller or use a wheelchair completely separate from traffic, all the way from the new neighborhood greenway at Arsenal and McCausland to Lemay and Carondelet Parks,” says Gutierrez.

Construction is expected to last about 10 months.