Project will begin this week to protect nearby endangered bat populations 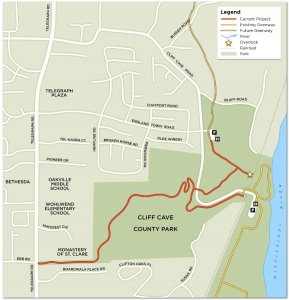 Residents of and visitors to South St. Louis County will soon have a new opportunity to explore Cliff Cave County Park, with a planned 2-mile extension of the Mississippi Greenway set to begin construction this week. Great Rivers Greenway and St. Louis County Parks are starting work before the endangered bat species that reside in the area come out of hibernation. Construction on the greenway is expected to take about a year.

The $4.3 million construction project will provide a paved and ADA accessible connection between the upper portion of Cliff Cave County Park and the existing 4.6 miles of paved trails that run through the lower portion of the park. The new project will allow visitors of all abilities to experience the park’s unique geography and will feature a safer and improved scenic overlook.

“This project will allow people to enjoy amazing views of the Mississippi River and take advantage of  safe and accessible ways to explore this great park,” said Susan Trautman, Executive Director of Great Rivers Greenway.

This project also includes the creation of a trailhead on Cliff Cave Rd. for a future connection to the north that will eventually extend the Mississippi Greenway to the existing trails within Jefferson Barracks Park. Great Rivers Greenway worked closely with the community over the past two years in an effort to gather input from residents and address their concerns.

The first step will be to remove trees along the planned greenway path. These efforts will follow guidelines provided by the United States Fish and Wildlife Service to protect the several species of tree roosting bats – including the federally endangered Indiana Bat – that are currently hibernating in nearby Cliff Cave.

This phase of the project will also include the removal of invasive plants—including harmful Bush Honeysuckle—that are choking out native plants and other trees within the park. More than a thousand native trees, shrubs and other plants will be planted along the trail to restore and boost the native ecology of the greenway.

Great Rivers Greenway is a regional greenway district created by a vote of the people in St. Louis City, St. Louis County and St. Charles County. The organization improves the quality of life for all in the St. Louis region by connecting people to their rivers, parks and communities through a network of greenways