The City of St. Charles’ Parks and Recreation Department welcomes families to enjoy its two completely redesigned and rebuilt aquatic centers, both of which open to the public on May 24.

The combined construction cost of both new facilities is $18.5 million, according to Maralee Britton, director of the city’s Parks and Recreation Department. 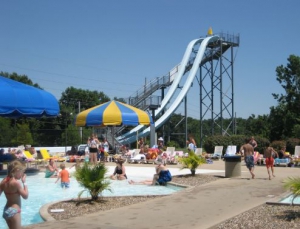 “We’re thankful to citizens’ support of Proposition P in August of 2016 by which they approved a half-cent sales tax for the purpose of parks and stormwater-related projects,” said Britton. “Critical to the success of these design and construction projects was the input from citizens who will use and enjoy our Blanchette and Wapelhorst facilities. Public involvement weighed heavily in what you see at each of these parks. We’re excited to reopen them to families toward the end of this month and we’re confident they will be well used and enjoyed,” she added.

Blanchette Aquatic Facility, located north of Interstate 70 close to I-370 in St. Charles, is the smaller of the two centers and the one that was entirely replaced. Its redo features a 4,674-square-foot lap pool, a nearly 4,000-square-foot leisure pool, a 4,929-square-foot children’s pool with zero-depth entry and a 1,008-square-foot, deep-water pool. An over-the-water, rock-climbing wall is a signature feature at Blanchette, according to Britton. “We’re excited to introduce the 182-foot-long body PoolSider slide and the Aqua Tube Drop Slide,” she said. The project also included construction of a new bathhouse, filter building and all new equipment therein.

Wapelhorst Aquatic Facility, the larger of the two new centers and the completely renovated one, is located south of I-70 in St. Charles. The new park boasts a lazy river, leisure pool, children’s pool, plunge pool, spray ground, wet ledge, lazy river and the Boomerango, an 353.5-foot-long, enclosed specialty inner-tube waterslide. “We’re the 21st organization in the U.S. to have one of these slides, and only the 70th in the world to get one,” Britton said. “The closest Boomerango to us is 500 miles away.”

Contegra Construction Co. Project Manager Angela Ridgway said building and installing the water centers’ resources on a fast-track schedule was accelerated further by the complexities of receiving the Boomerango that was being shipped from another country and navigating U.S. Customs regulations. “Boomerango, is a slide amenity that is manufactured in Canada,” Ridgway said. “We were on an accelerated construction schedule – only 11 months – to demolish the old facilities and build both of these new facilities in order open them in time for summer,” she added.

A tight construction materials laydown area added to the accelerated schedule, according to Ridgway, as did the goal of completing construction of the pools’ concrete shells, which occurred on schedule by late December.

“This is a big deal for the City of St. Charles’ Parks and Rec Department in the history of the organization,” she said. “The city has been developing water parks for 80 years.”

The Wapelhorst Aquatic Facility is located at 1875 Muegge Road, St. Charles, MO, 63301.   For more information on the Dedication Celebration, contact the Parks & Recreation Department at 636-949-3372.