Efforts to promote diversity and inclusion in the construction industry were recognized by the St. Louis Council of Construction Consumers (SLCCC) during its annual awards on March 5, 2018 at the St. Louis Science Center Planetarium, St. Louis, MO. 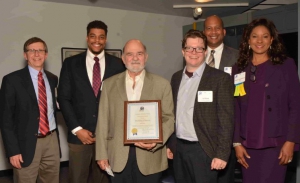 The Building Futures program was awarded a Diversity Inclusion Organization Award for their leadership support for career development in north St. Louis through hands on workshops for grades 4 through 12.

Serving over 650 students annually, the program offers design and build workshops that emphasize problem solving with 3 dimensional challenges to build stage sets, display elements, furniture scale assemblies and objects for school, community or personal use.  The program also focuses on sustainable design to assess the choice of materials that could impact the environment.  The program engages youth in under-served areas to support interest in potential construction careers. 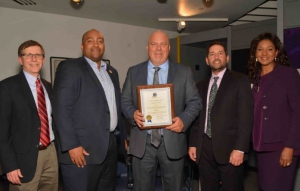 A second Diversity Inclusion Organization Award was presented to the Electrical Connection in recognition of efforts to promote Science Technology Engineering and Mathematics (STEM), especially programs that focus on women and minorities.  Working with the St. Louis Science Center and FIRST Robotics, more than 10,000 students in school districts, many with a significant minority student body, were engaged with projects connected to electrical careers.  With apprentice participation by minorities dropping to the single digits during the recession 10 years ago, the organization’s efforts have now raised that participation to 24%. 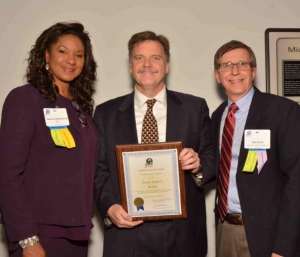 The Diversity Inclusion Champion award was presented to Scott Anders of the U. S. District Court Probation Office.  His office provides a “Second Chance” program for ex-offenders to reenter society through training, education, employment, housing and financial management.  The innovative program has become a national model for successful reentry.  Despite the highest  risk case load in the federal system by the Eastern District Court of Missouri, the program has reduced recidivism to less than 15% compared to 67% reported nationally.

A Diversity Inclusion Champion award was also presented to Gabriella Ramirez-Arellano of the Hispanic Chamber of Commerce.  She was recognized for her focus on resources that are not as accessible to immigrants or other language speakers, including access to technology resources.  She conducted Contractor Connect Workshops to bring minority and disadvantaged business enterprise contractors together with leaders in the construction industry and supported more than 25 businesses with seeking minority business certification to support their eligibility for business.

Best practices in the construction industry were also recognized by the St. Louis Council of Construction Consumers (SLCCC) during the annual awards.

The St. Louis Council of Construction Consumers (SLCCC) represents major buyers of construction.  SLCCC serves as the owner advocate organization for achievement of best value in project delivery and is the regional leader that champions best practices through educational programs, information dissemination and collaboration.