Nearly a quarter of the commercial floor space in the United States is heated by packaged boilers and given that space heating is by far the biggest energy user in commercial buildings (see red wedge in picture below), the standard is supposed to yield significant cost and energy savings. 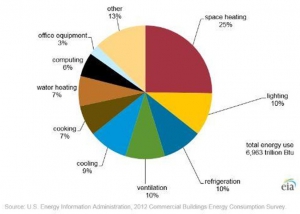 Commercial packaged boilers, which are also found in multifamily buildings and small industrial facilities, are powered by oil or natural gas and generally serve buildings and facilities with central distribution systems that circulate the steam or hot water from the boiler to other parts of the building. These boilers can fit in tight spaces and be installed relatively quickly.

The packaged boiler energy efficiency standard was one of five released by DOE on Wednesday.  Others were announced for pool pumps, portable air conditioners, uninterruptible power supplies (battery backup systems that keep electronics running when the power goes out or falters); and walk-in coolers and freezers. All were released as part of a federal standards program under the National Appliance Energy Conservation Act of 1987, which was signed into law by President Reagan.

The DOE estimates that the packaged boiler standard will save 0.27 quadrillion BTU (quads) of energy once it goes into effect in 2019, enough to heat all the natural gas-heated homes in New England for a year and a half, and save consumers up to about $2 billion after accounting for the cost of the new equipment.  The DOE estimates the new standards will save consumers between $200 (for a small gas-fired steam boiler) and $36,000 (for a large oil-fired boiler), over the life of the boilers with a payback of 10.1 years and 2.8 years, respectively. The typical lifetime of a packaged boiler is 25  years.

The DOE expects the standard will reduce the energy use of commercial packaged boilers by between 2 and 6 percent compared to the current standard and will avoid roughly 16 million metric tons of carbon dioxide emissions over the next 30 years, as much carbon pollution as is emitted by three million cars in a year.

The new rule raises the required boiler efficiency from 80 percent to between 81 to 88 percent.  They are technology neutral, so manufacturers have control over how they meet the targets.