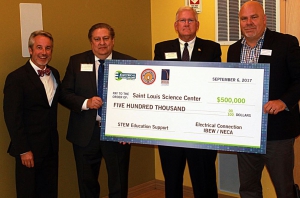 “As the leading organization in the electrical and communication industry, the Electrical Connection has been a great partner,” said Bert Vescolani, president and CEO of the Science Center. “We are grateful for continued support of our STEM education programs that advance our mission to ignite and sustain lifelong science and technology learning.”

In 2013, the Electrical Connection sponsored new state-of-the art lighting for the James S. McDonnell Planetarium and provided relevant industry expertise on the applications of STEM subjects, including robotics, building automation and renewable energy.

“The Science Center’s mission aligns well with our efforts to train the next generation electrical and communications workforce,” said Frank Jacobs, business manager, IBEW Local 1.  “With our NECA partners, we invest $3 million annually in training the workforce that installs and maintains the technology for automation, the digital age, connectivity, renewable and traditional forms of energy.”  Jacobs serves on the Science Center’s board of trustees.

The Electrical Connection partnership operates the IBEW/NECA Electrical Industry Training Center in St. Louis. Founded in 1941, it is the nation’s first registered electrical training program. Since then, it has trained more electricians and communication technicians than any education program in Missouri.  The five-year, 10,000-hour training program is funded by IBEW/NECA at no taxpayer expense.

“Our workforce development spans more than 70 years and is committed to keeping pace with new technologies defining our future,” said Doug Martin, CEO, St. Louis Chapter NECA.  “The Science Center has been a great partner in helping educate the public on the ever more complex electrical and communications infrastructure that our contractors engineer, install and maintain.”

Jim Curran, executive vice president, Electrical Connection noted that the partnership has been particularly effective in the area of renewable energy.  “Our Electric Vehicle Infrastructure Training Program (EVITP) pairs well with the Science Center’s electric and autonomous vehicle education initiatives,” said Curran.  “For the electric and autonomous vehicle market to thrive there must absolute confidence that quality, licensed contractors and electricians are installing the infrastructure for fixed charging stations supporting the vehicles”

Members of the Electrical Connection provide safe and reliable electrical construction, maintenance, repair and replacement services across Missouri, the nation and the world.  For more information, visit www.electricalconnection.org.