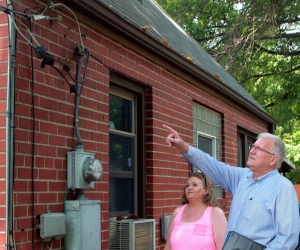 Debbie Augustine thought she was on the threshold of stabilizing her life after recovering from a coma and a serious illness.  The 47-year-old mother bought a home next door to her parents’ house on Mitchell Avenue in St. Louis only to find it had serious electrical issues that would cost $4,800 to repair.

“My daughter and I had been through so much and it finally looked like we going to have a home of our own,” said Augustine.  “But the electrical issues were overwhelming, creating unsafe living conditions.  I had limited resources to buy the home and nothing left for the needed repairs.”

“The Electrical Connection is such a blessing in my life,” said Augustine.  “IBEW/NECA rebuilt my electrical systems ensuring my daughter and I can live safely in our new home.”

Augustine’s medical issues began two years ago when she suffered a cardiopulmonary illness that put her in a coma for seven days.  Forced onto disability, Augustine and her daughter, Dakota, moved in with her parents who lived on Mitchell Ave. in St. Louis.  “I was grateful, but for my parents, myself and my daughter it was cramped quarters,” said Augustine.

Augustine said she thought her prayers were answered when the home next door went up for sale.  But after purchasing it, she learned it had significant issues with the electrical service into to the home, including improper wiring, a rusted out circuit panel, overloaded circuits, lighting and junction boxes in need of repair.

“I thought it was a dream come true, but it took the Electrical Connection to make that happen,” said Augustine.  NECA contractor Northwest Electric Co., Inc. teamed with IBEW to make the repairs on August 4, 2017.

This is not the first time the Electrical Connection has responded to a community need. For 14 years, the IBEW/NECA partnership has supported Rebuilding Together St. Louis.   Since 2003, the partnership has donated labor and more than $825,000 in materials to improve more than 485 homes for low-income, disabled and elderly St. Louisans.  It also supports Habitat for Humanity St. Louis in building new homes.

Augustine-Curran Pointing – Left to right, Debbie Augustine looks on as Jim Curran, executive vice president of the Electrical Connection, points to one of the many electrical hazards in need of repair at her home.