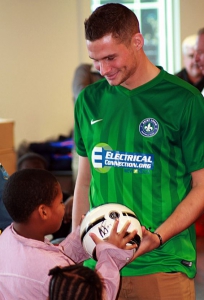 The Electrical Connection is being saluted for a number of initiatives to improve the communities that its contractors and electricians serve.  Most recently, this has included helping energize a Ferguson, Mo. “Shop with a Cop” program on Dec. 17, 2016 while also increasing its support for the rural St. Francois County “Shop with a Cop” program on the same day.  The expansion of both programs came about when the Electrical Connection partnered with Saint Louis FC for a fundraiser during a July 31, 2016 soccer game, allowing the IBEW/NECA partnership to donate $5,000 to each program.  As a result, more than 500 disadvantaged children were served by the holiday giving and community trust building programs.  The Electrical Connection’s involvement in “Shop with a Cop” dates to 1993 when it first began supporting the St. Francois County program.  It has donated more than $54,000 to the program since. 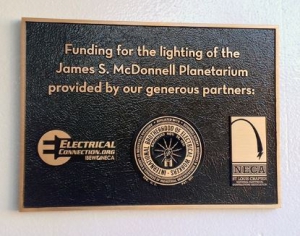 Other Electrical Connection civic endeavors include:

Finally, for more than 70 years, the IBEW/NECA industry-funded apprenticeship program has consistently delivered the best value in workforce development, free of charge and at no taxpayer expense, to meet the Missouri’s next generation electrical needs, including electric vehicles, cybersecurity and robotics.  Diversity is fully integrated into its programs.  Up to 37 percent of its apprentices in the last 10 classes have been minorities.  It also invests in the Regional Union Construction Center’s mission to create a more sustainable minority contracting community.

The Electrical Connection is among six organizations named finalists for the Ameren Corporate Citizenship Award.  Others include Accenture, Anders, Emmis St. Louis, Gateway to Innovation and Mastercard.  The Arcus Awards honors companies, organizations, or institutions who make St. Louis a more inclusive and attractive place to live, work, and invest for all people. The St. Louis Regional Chamber will salute 56 companies across 10 categories that align with the Chamber’s purpose to inspire a greater St. Louis. Learn more at www.stlregionalchamber.com.