Kadean Construction of Fenton is building “Building 5,” a 769,000-square-foot speculative building in Lakeview Commerce Center, Panattoni Development’s 750-acre bulk distribution park in Edwardsville. Kadean Construction President Mike Eveler said the construction project, which includes 80 loading docks with clearing heights of 36 feet, is the mirror image of a twin warehouse that his firm completed in 2017 within Lakeview. Eveler anticipates construction of Building 5 to wrap up by September.

“This is the second building we’ve built recently at Lakeview Commerce Center,” he said. “In addition to constructing Building 5, we built its sister building, Building 4, which is occupied entirely by Amazon.”

Although Building 4 was completed in 2017, Kadean is already performing major technology upgrades for client Amazon as the e-commerce giant embraces the very latest advances in fulfillment/distribution technology.

“In 2017 they (Amazon) invested approximately $23 million worth of tenant improvement work (in Building 4) as well as heavy and electrical distribution,” said Eveler. “Much of this investment was related to robotics within the facility that hold the product and move it around.” 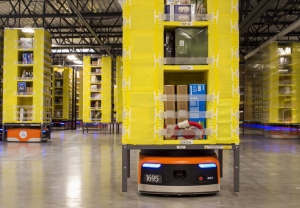 As innovations in e-commerce order fulfillment occur at a pace that’s nearly as swift as that of e-commerce product delivery itself, serving forward-thinking industrial clients like Amazon is also a dynamic process, according to Eveler. “About six weeks ago, Amazon contacted us to request additional work specific to fulfillment robotics,” he said. “We’re already tearing out some of what we built (internally) for them in 2017 to help them upgrade with the latest technology. Upgrades and modifications in their robotics system alone represent about $1 million worth of work,” he added.

The scope of work Kadean is performing includes upgrades of the Amazon Robotics (AR) field, a type of invisible electronic track network upon which automated guided vehicles travel. The robots travel over the AR field picking up an entire upright shelving unit known as an inventory pod, bringing it to a technician at a fulfillment and packaging station and later returning it to its designated storage area. Kadean’s work includes removing the existing AR field and picking stations as well as installing new power and data requirements for the new field and picking stations, and related electrical work to accommodate Amazon’s automated storage and retrieval system.

Kadean works in tandem with Panattoni Development in other industrial parks across the St. Louis MSA such as Aviator Business Park in Hazelwood – the 155-acre park on the site of the former Ford Motor Co. plant at Lindbergh and Interstate 270.

Mark Branstetter, partner at Panattoni, said his firm has developed approximately 1.7 million square feet in Aviator and has equally that much ground available for future development.

“We are about halfway through developing Aviator,” Branstetter said. “It’s interesting…although Lakeview and Aviator are relatively proximate – some 15 miles from each other – their respective user groups are markedly different. Lakeview in Edwardsville attracts the larger, regional distribution centers, whereas Aviator in Hazelwood attracts more local infill.”

Although e-commerce is a prominent driver of bulk warehouse and fulfillment development nationally and regionally, Branstetter said e-commerce isn’t the only factor propelling the construction of these types of buildings.

“A big topic that receives attention is indeed e-commerce,” he said. “It’s certainly a big trend, but it’s not the sum total of what’s driving development in this industry sector. E-commerce is actually a very late trend, just in the last decade or so. Companies are trying to optimize their supply chain, be it location or size orientation. But once they’ve optimized their locations across the country, firms are then working to optimize the inner workings of their processes, again with the consumer at the forefront.”