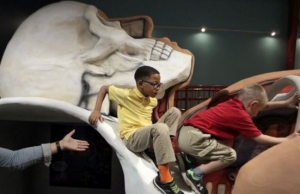 Thanks to ISC Contracting and Uhlig Architecture, the St.  Louis region’s first-ever children’s museum solely dedicated to health education opened its doors on Saturday, May 14, to deliver a unique form of ‘edutainment’ designed to give children and families the passion to lead healthy lives. Debuting as HealthWorks! Kids’ Museum St. Louis,  the $2.5 million facility boasts 12,000 square feet of hands-on, interactive exhibit and programming space that is accessible to those of all abilities. HealthWorks! Kids’ Museum St. Louis is located at 1100 Macklind Ave, near the Saint Louis Science Center. Admission is $7 per person and free for those two-years-old and younger. Parking is free.

“We are working to infectiously contaminate children of all ages to learn, have fun and make great life choices,” said Shannon Woodcock, president and CEO of HealthWorks! Kids’ Museum St. Louis. “We are working on the rapid spread of healthy life habits, and couldn’t be more excited to have opened our doors. We look forward to infecting the countless at our facility in the years to come.”

HealthWorks! Kids’ Museum St. Louis is anchored by a 55-foot long, 25-foot wide, 8-foot tall human skeletal structure that serves as the first universally accessible indoor playground. This “Interactive Dude” features a leg slide; a bone balance beam; an electronic, memory-style healthy eating game that is attached to the digestive track; an all-bout poop panel that passes gas; the ability to go inside a skull and learn about the different parts of the brain and their functions; and more.

Visiting children can also take a virtual 10-minute, 4D tour through the mouth, following an apple’s trip through the digestive system in The Mouth Theatre, which includes a bubble experience. The Face Your Future exhibit gives children a glimpse into the future using age progression software that showcases what each child could look like based on life choices tied to tobacco usage, sun health and food consumption. There is also a mock medical office, dentist office, pharmacy and Farmer’s Market with tools, technology and dress-up stations to help kids transform themselves into mini-healthcare professionals or play the patient or customer. There is also an All About Me data collection station; a fully-functioning kitchen for cooking demonstrations and educational series, and an immersive play space using BeamTM (previously EyePlay) technology to host interactive floor games.

The Delta Dental Health Theatre, which was a popular fixture on Laclede’s Landing for the last 38 years, is also housed in HealthWorks! Kids’ Museum St. Louis. It serves as an interactive learning center with unique, high-energy, educator-led programming designed to increase individual knowledge about the connection between personal choices and health outcomes, encourage positive health practices and turns visitors into health advocates for themselves, their families and the community. The widely-popular, world’s largest fiberglass teeth are also be on display for kids to interact with in a whole new way.

ISC Contracting was the general contractor for this landmark project. The architect was Uhlig Architecture, LLC, and the exhibit design work was completed by Qualified Services, Inc.  Cre8play is the company that designed and fabricated the “Interactive Dude.”

HealthWorks! Kids’ Museum St. Louis became a reality thanks to a capital campaign that got underway in the spring of 2015 with the goal of raising $2.5 million for this project. To date, more than $1.5 million has been secured, thanks, in large part, to an $850,000 contribution by long-time supporter Delta Dental of Missouri. Other key financial supporters included members of the Delta Dental Health Theatre’s Board of Directors and staff, St. Louis Office for Developmental Disability Resources, The Smile Generation, The Little Medical School, Dana Brown Charitable Trust, Jefferson Memorial Community Foundation, theTrio Foundation of St. Louis and IKEA. This project is also made possible through a partnership with the Saint Louis Science Center and collaborations with several regional healthcare and business organizations. The building housing the new museum is owned by the Saint Louis Science Center Foundation, which has entered into a long-term lease agreement with HealthWorks! Kids’ Museum St. Louis.

HealthWorks! Kids’ Museum St. Louis came into existence as a result of efforts to expand The Delta Dental Health Theatre to address broader, overall health issues after Delta Dental of Missouri became a major corporate sponsor in 2004. Those plans evolved and grew more ambitious over the next several years, ultimately leading to the closure of the original theatre on Laclede’s Landing in downtown St. Louis after 38 years so it could be housed in the new, dramatically expanded museum. The Delta Dental Health Theatre was originally organized as a program under the Foundation of the Greater St. Louis Dental Society in 1977. In 2002, it was incorporated as an independent 501(c) (3) not-for-profit organization.