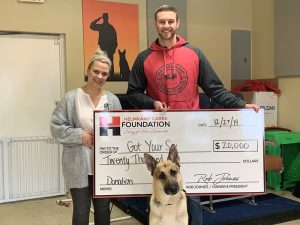 Although Helmkamp Construction Co., a local business since 1938, has supported many charities over the years, it has been a long time goal of current and former owners to create an employee guided program that allows the company to give back in an organized, consistent, and impactful manner.

Last July, the general contractor introduced the Helmkamp Cares Foundation, with the intent to better direct their focus and culture on the type of local business they aim to be… a good neighbor who cares about the community.

Helmkamp President, Rob Johnes, gave an overview of the new foundation by saying “The Helmkamp Cares Foundation is comprised of an employee-based committee to manage the charitable requests that we receive on a regular basis.  Helmkamp would like to be able to give everyone support, but it’s simply not possible to do so.  Helmkamp Cares will allow us to allocate and focus charitable giving based on the initiatives our employees are collectively most passionate about.”

Jen Jackson, Marketing Director & Chair for the Helmkamp Cares Foundation said “It was important to us when creating the program that we found meaningful ways to help out local organizations where we live and work.  That’s how the Maximum Impact Awards were created.  All employees were surveyed about causes that meant most to them.  Our committee reviewed those and chose three deserving organizations for our inaugural 2019 Maximum Impact Awards.  They were the Juvenile Diabetes Research Foundation, Alton Memorial’s Health Services Foundation Cancer Patient Programs, and Got Your Six Veterans’ Support Dogs.  All three of these organizations received $20,000 from Helmkamp Construction.” 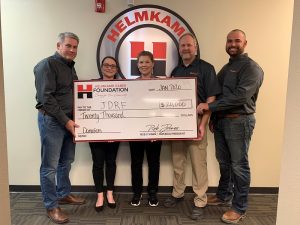 Additionally, Johnes announced at the company’s annual holiday party that Helmkamp Construction had its most successful year in business in 2019.  To celebrate, all employees (and their spouses) were given $500 in play money called “Helmkamp Bucks” and asked to distribute them among seven additional charities that were selected by their peers on the foundation committee.  Those Helmkamp Bucks were tallied and turned into real donations totaling $50,000.  The seven organizations that benefitted from Helmkamp’s year-end giving celebrations included: The Alzheimers Association, Fisher House St. Louis, Haven House, Meals on Wheels, MS Society, National Children’s Cancer Society, and the Ronald McDonald Charities of St. Louis.

In 2018, Helmkamp Construction Co. donated $80,000 to charitable organizations in celebration of their 80th year in business in the metro-east area.  In 2019, charitable spending was over double that at almost $170,000.

“It was such a pleasure for us to learn more about the great work of the JDRF, Got Your Six, and Alton Memorial Hospital’s cancer patient programs and to be able to help them do that work,” said Jackson.  “Rob (Johnes) is committed to leading Helmkamp with the top 2 things in mind being safety and philanthropy.  Keeping our employees and customers safe on the job site and being able to give back is what he calls success.  As employees, that leadership gives us all something to feel really great about.”