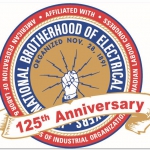 Hotels, restaurants, retailers, civic attractions and more are all benefiting from the estimated 4,000 delegates who began arriving Sept. 16, 2016 for the convention which concludes on Sept. 23, 2016. According the St. Louis Convention and Visitors Commission the convention is generating an economic impact of $7.9 million in direct spending. The St. Louis Business Journal earlier reported that a total of 22,815 hotel room nights would be reserved as a result of the convention.

One of the highlights kicking off the convention was a Sept. 15, 2016 ribbon cutting for the Henry Miller Museum in St. Louis where IBEW was foundeded 125 years ago as the first electrical union in the nation. In addition, there was a “Day of Service” where up to 400 IBEW members performed 26 community betterment projects in St. Louis.

The convention has included a “Gateway to St. Louis Introductory Tour,” shopping excursions throughout the St. Louis area, including St. Charles county, a tour of St. Louis’ historic homes, a concert and picnic and a visit to Ballpark Village. It also includes visits to other well-known attractions, including the Anheuser Busch Brewery, which IBEW has teamed with members of the St. Louis Chapter of the National Electrical Contractors Association (NECA) to build and maintain over the years, and, of course, the iconic Ted Drewes.

Learn more about the convention at this link and see all of its contributions to the St. Louis area in this video.