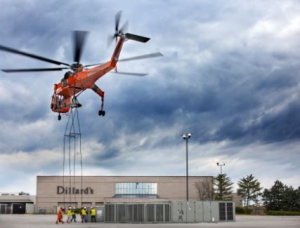 The four-hour project on a Sunday morning involved 16 helicopter lifts to remove four existing HVAC units (two units had to be cut into two pieces due to their weight); four curb adaptors for placement of the units; and replace with four new HVAC units. Sixteen IFS employees were on-site along with employees of Erickson, the air crane operator, and Budrovich, the rigging agent.

The new units provide more than 280 tons of refrigeration capacity, increase efficiency and improve fresh air ventilation, resulting in better comfort and a healthier indoor environment for the thousands of employees and shoppers who visit the popular mall.

“From a safety standpoint, this was a very challenging project,” said IFS Project Manager Steve Errante. “Our safety director Mike Schwaller along with Mall Operations Manager Robert Minnix mapped out an extensive safety plan to protect the workers and the public.”

Schwaller and Errante conducted an extensive inspection prior to the helicopter lift to ensure complete safety. An area within 200’ of the helicopter lift was cleared of all loose debris, trashcans, antennas, small air conditioning compressors, restaurant patio furniture and other materials that could become flying debris hazards in the 70 MPH downwash created by the helicopter rotors.

Entrances to the mall were locked so that no tenants or shoppers would be in the Macy’s building where the units were being set. A 150’ “sterile” area was established and maintained throughout the flight activity, and only workers essential to the project were allowed on-site.

The team monitored weather conditions during the week leading up to the helicopter lift, since strong, sustained winds over 35 mph or lightening would delay or cancel the project. Despite rain, threatening skies and up to 25 mph winds, the project was completed on time with no injuries or incidents.