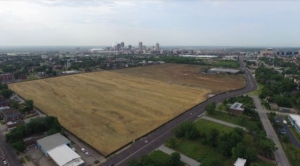 Three construction joint ventures have been invited to submit proposals to the U.S. Army Corps of Engineers by July 18th as finalists in the competition to build the National Geospatial Agency’s $1.7 billion new St. Louis headquarters.

The Next NGA West (N2W) site spans 97.2 acres in North St. Louis at the north corner of Jefferson Avenue and Cass Avenue.

The finalists are Clark-JE Dunn N2W, McCarthy Hitt – Next NGA West and Mortenson-Alberici. The USACE narrowed the list to the final three earlier this year and expects to award the overall construction contract to the winning bidder in March 2019.

The USACE’s Kansas City District is spearheading the process, according to Stephanie Hall, program manager for Next NGA West.

“We have down-selected to three great firms and will continue to look at each of them as we receive their proposals next week,” said Hall.

In addition to the main RFP, the USACE will award five small business set-aside construction contracts using the design-bid-build delivery method once the master design-build contract has been awarded. Hall said these small business set-asides are specific to the following project facets: 1) the government’s integrated program office on site; 2) a remote inspection facility, 3) the surface parking lot, 4) access control points and 5) landscaping.

“The new facility requires spaces that can easily respond to changing security levels while providing adaptable, flexible, multi-function spaces,” she said. “This building will be equipped to serve the NGA St. Louis workforce for the next 40 years.”

The project is expected to generate more than 5,000 construction jobs. The new site will accommodate 3,000 agency employees.