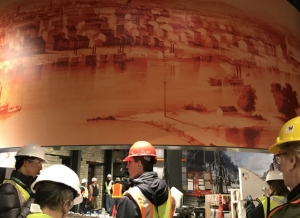 In partnership with the Gateway Arch Park Foundation, Bi-State Development Agency, Jefferson National Parks Association and Great Rivers Greenway, the NPS led a special hard-hat tour Thursday afternoon of the nearly 150,000-square-foot, $176 million facility. The museum and visitor center is on schedule for a July 3 public reopening when Fair Saint Louis returns to the Arch grounds. It is a major component of the overall $380 million CityArchRiver project.

“It’s all about movement,” said Bill Haley, founder of Haley Sharpe Design, the project’s global design consultant that is known for project exhibits at famous venues such as the Smithsonian Institution’s National Air and Space Museum and Stonehenge. “The new museum and visitor center here is an open, flexible, interactive design that will engage visitors and lead them through history in a personal, meaningful and inspirational way. Forty percent of it is interactive, inviting the visitor to be an active participant in the story.” In addition to Haley’s firm which lead design of the exhibits, Cooper Robertson, James Carpenter Design Associates and Trivers Associates designed the visitor center expansion. Pacific Studios and Kozeny Wagner built the museum exhibits, with McCarthy Building Companies working as lead contractor on the visitor center expansion. 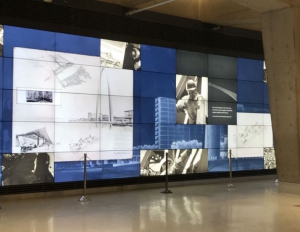 Moving through the layout will take visitors through six distinct periods in Westward Expansion history. The exhibit areas are named Jefferson’s Vision, Colonial St. Louis, Riverfront Era, Manifest Destiny, Building the Arch and New Frontiers. Each is positioned as part of a hub-and-spoke pattern that is representative of the historical movement west.

On the mezzanine level, contractors are busily perfecting what Haley says is the largest terrazzo floor map ever designed and built in the U.S. Visitors will be able to walk across North America identifying trail systems, river networks and more as they trace pioneers’ journeys westward.

Floor-to-ceiling original artwork painted by former St. Louis resident Michael Haynes depicts the signing of the Louisiana Purchase Treaty in 1803 and other landmark historical figures and occasions. Bob Moore, historian with the JNPA, said the new museum and visitor center tells the story of the early pioneers from a clearly St. Louis perspective. “We wanted to be sure that people understood that for 40 years, St. Louis was a French-speaking town and enjoyed a symbiotic relationship with the Osage Nation and others,” he said. “Rather than telling St. Louis’ story from a national vantage point, we’re truly telling it with a distinctive St. Louis voice.”

A 100-foot-wide video wall in the tram lobby, produced by Aperture Films, displays a video collage portraying the building of Gateway Arch and other scenes of American innovation. Nearby, a video feed of views from the top of the Arch will enable those with accessibility challenges or other issues to experience the Arch virtually without actually taking the tram ride to the top. Also nearby, visitors will have the opportunity to create their own multi-media photo collage and output it in postcard form to preserve their original memories from the visit.

Signature elements from the old museum that will find their way to prominence in the new one include Gateway Arch architect Eero Saarinen’s winning tabletop model in the Jefferson National Expansion Memorial Competition. The new museum will also feature tabletop models of the competition’s finalist entries.

This is the first major renovation of the Museum and Visitor Center since the facility opened in 1976. Construction on the Arch grounds began in August 2013; work on the museum and visitor center began in April 2015.