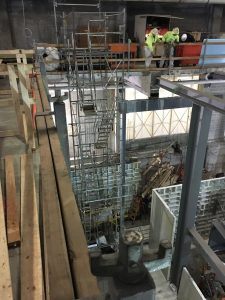 The vault is being built beneath a parking garage on the Washington University Medical Campus, which also includes Barnes-Jewish Hospital and St. Louis Children’s Hospital, in the city’s Central West End.

When completed in mid-to-late 2019, the 40-foot deep vault will house the massive cyclotron, which will produce a focused beam of isolated protons for “pencil-beam scanning,” an advanced form of radiation therapy for patients treated at the S. Lee Kling Proton Therapy Center at Siteman.

In this type of radiation therapy, a single, narrow proton beam is aimed with great precision directly at a cancerous tumor and adjusted for intensity. Its precision helps to spare surrounding healthy tissues and organs and reduce the risk of treatment-related complications, according to experts.

The total cost of the project, which is scheduled to completed in mid-to-late 2019, is $32 million, including $17 million for the cyclotron and related infrastructure provided by Mevion Medical Systems.

The underground proton vault will be 30 feet wide, 40 feet long, and 40 feet tall, and made mostly of high-density concrete with walls that are four feet thick, said Matt Breeze, vice-president of Kadean Construction, based in Fenton, a suburb of St. Louis.

Upon completion, the finished patient treatment room will actually be located in the middle of what is now a cavernous, three-story area. The massive cyclotron and its infrastructure will encompass the treatment room, although it will never be seen by patients or the doctors.

“This is a very complex project,” Breeze said. “We had to dig all the way to bedrock, and then we had to excavate and remove three-to-six feet of bedrock, which serves as the foundation for the concrete floor and the walls of the vault.”

This will be the second proton therapy vault constructed by Kadean at Siteman Cancer Center. In 2011, Kadean finished constructing Siteman’s first proton vault, which, at the time, was the first of its kind in the world. Siteman began treating patients with the first system in 2013. The second vault is immediately adjacent to the first one, which provides some logistical challenges because the construction site has very limited space in which to work or free access for heavy construction equipment.

The first vault, which also houses a Mevion cyclotron, is slightly smaller, Breeze said. And, like the second vault, its walls are four-feet thick and made with high density concrete.

“We learned a lot when we built the first vault,” Breeze said. “The site traffic and logistics are fairly complicated because we had to tackle our work without interrupting the constant flow of patients and hospital deliveries, just as we always do in all medical construction.”

He added that other proton vaults have been built with 14 foot-thick walls for radiation containment.

“Because of the confined area we had to work with when we built the first vault, however, our walls could only be four feet thick,” he said. “The design team solved the problem by using Hematite, a heavy, iron ore aggregate mined in Brazil and shipped to St. Louis.”

Breeze said work on the second vault will involve 25-30 St. Louis-area subcontractors and their crews.

The new proton therapy system will complement the first one, and will be among an array of radiation therapy options available for adult patients at Siteman Cancer Center and pediatric patients through Siteman Kids at St. Louis Children’s Hospital.

Pencil-beam scanning delivers a radiation treatment through a single, narrow proton beam aimed directly at the tumor and adjusted for intensity. Then, the beam paints the radiation dose on the tumor. Alternatively, Siteman’s first proton therapy system precisely targets the tumor using magnets that scatter the proton beam across the tumor.

Today, there are 29 proton therapy facilities throughout the United States, according to the National Association for Proton Therapy, and 75 worldwide, according to the Particle Therapy Co-Operative Group (PTCOG). Both are independent, non-profit organizations that track the industry and promote the benefits of proton and particle therapy.

Siteman Cancer Center treats adults from throughout the region and beyond, as well as pediatric cancer patients from St. Louis Children’s Hospital. It is ranked among the top cancer treatment centers by U.S. News & World Report and is one of only a few cancer centers to receive the National Cancer Institute’s highest rating of “exceptional.”

Founded in 1963, Kadean Construction, one of the fastest growing construction companies in the Midwest, specializes in pre-construction, design-build, construction management, and general contracting services in the medical, senior living, retail, commercial, and industrial sectors.

Kadean also has a Kansas City, MO office to better serve customers in Western and Mid-Missouri, Eastern Kansas, and other Midwest locations.