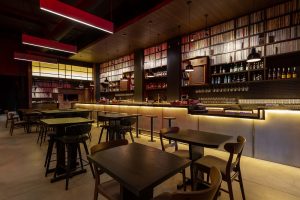 Kadean Construction has completed the buildout of a new Japanese-inspired cocktail lounge, restaurant and record listening room called Takashima Records in the Grove neighborhood of St. Louis.  Located inside the Chroma luxury apartment complex at 4905 Chouteau Avenue, the 2,776 square foot venue features a ground floor dining room and bar area plus a second-story mezzanine lounge and private event space with a combined total seating for more than 100 customers.

Kadean worked with architect V Three Studios to facilitate the buildout from an empty white box shell space into a finished venue centered around Japanese and American art and inspired by vinyl record stores in Tokyo that double as bars. This included the creative utilization of two commercial shipping containers to establish the floor of the mezzanine level while simultaneously creating booth spaces in the ground floor dining area.

“The shipping containers are integral to Takashima Records’ design and required special on-site preparations and installation,” said Chris Nieburg, project manager for Kadean Construction.  “Before being moved into the building, the containers had side panels removed for access to the customer booths and were structurally altered to support the additional loads of both the customers and furnishings. The storefront of Takashima had to be disassembled so the containers could be craned inside and placed on their foundations. The concrete floor for Takashima was then poured around the containers for seamless integration.”

Kadean also oversaw all construction services and ensured that all mechanical, electrical and fire protection systems were incorporated properly into the building’s existing systems.  Construction began in July 2019 and was completed in early February 2020.

“Going into a project of this size in a building as beautiful as Chroma can be intimidating,” said Sean Baltzell, co-owner of Takashima Records.  “Working with Kadean allowed me to focus on creativity instead of getting lost in the frustrations of the buildout.  From bid to completion, Kadean was quick, transparent and efficient.”