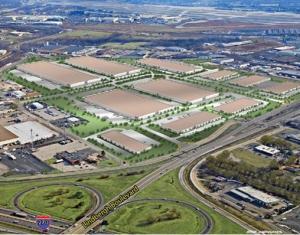 Kadean Construction has been tapped by Panattoni Development to construct its fourth light industrial building in the Aviator Business Park in the City of Hazelwood, one mile north of the St. Louis-Lambert International Airport, it was announced today.

The 548,000 square foot, concrete, tilt-up building, which will cover 13 acres under roof, will have a clear height of 32 feet, and a total of 82 loading docks – 40 on the north side and 42 on the south – side, said Mike Eveler, president of Kadean Construction Co., which is based in suburban St. Louis.

“This will be a very flexible building that can be used for as many as four companies or one very large tenant,” he said. “The pass-through design, the number of docks, the all-concrete pavement and roadway and tractor trailer storage around the perimeter will make it very appealing for a tenant that relies on a high volume of daily transfers of goods or for other light industrial purposes.”

Construction of the building will begin immediately, and is due to be completed by mid-August, said John Piedimonte, Kadean Vice President of Pre-Construction.

The building will be constructed with a structural steel frame and nine-inch thick, steel-reinforced concrete walls, and a seven-inch thick, concrete floor. It also will have an early suppression, fast-response (ESFR) fire protection system, LED lighting, and other amenities, Piedimonte said.

Aviator 10 will be the fourth Kadean-built structure in the 155-acre business park, which is served by Norfolk Southern Railroad and provides easy access to interstates 70, 270, 64, 44, 55 and other area highways. Kadean also built Aviator 3, 4, and 7, most of which are fully occupied. More space is available for a half-dozen smaller commercial or light industrial facilities on the site as well.

Aviator 10 is currently listed as a “spec” building, although Panattoni is in discussions with a variety of potential tenants, said Panattoni Development Partner Mark Branstetter, of St. Louis, who oversees development for the company in Missouri, Illinois and Indiana.

“We’re very proud of the progress we’re making at Aviator Business Park,” he said “The companies there now employ nearly 300 men and women from across the region. Aviator 10 will continue to enhance the park’s vitality and vibrancy, and we’re looking forward to Aviator’s continued growth and success.”

Kadean Construction, named one of the fastest growing companies in the region by the St. Louis Business Journal, specializes in pre-construction, design-build, construction management, and general contracting at the regional and national level.

Major Renovation at Christian Hospital in St. Louis County to be Completed by Kadean Construction in October