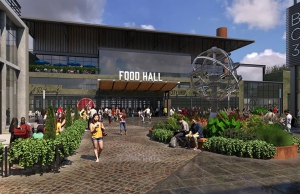 Environmental remediation work has commenced at City Foundry Saint Louis at Cortex, the new name of the former Federal Mogul Foundry property in midtown St. Louis. The proposed mixed-use redevelopment project is being designed and developed by Lawrence Group with significant reuse of the historic structures. The first phase of the overall $340 million project is programmed to include:

In addition to the commencement of remediation work on the site, Lawrence Group CEO Steve Smith has announced that Bull Moose Industries has become a major investment partner in the redevelopment. London-based Bull Moose Chairman, the Rt. Hon. Lord Swarj Paul, has continued to grow his investments in St. Louis, adding his partnership in City Foundry to his previous investments in the 634 North Grand building in Grand Center and the acquisition of XL Trailers earlier this year. “This new investment by Lord Paul represents our continued confidence in St. Louis as well as our belief in the exciting vision laid out by Steve Smith for the City Foundry development,” according to Bull Moose CEO Michael Blatz. Eagle Bank is providing the financing for the project.

The National Register of Historic Places nomination for the existing foundry complex was recently approved by the Missouri Advisory Council on Historic Preservation. Building on the region’s reputation as an innovation hub, City Foundry Saint Louis is envisioned as a place where ideas can thrive and where people can get connected and collaborate. The first phase of the car-optional development is expected to create 870 permanent jobs in addition to construction jobs, as well as spur additional development on neighboring properties. Great Rivers Greenway trails will traverse through the site providing a walkable connection between Saint Louis University, Cortex, and Metro stations as well as a pathway to Forest Park. “The City Foundry Saint Louis redevelopment represents another example of the continued investment and expansion of the Cortex brand. This will be a tremendous amenity to the already vibrant innovation community that exists at Cortex,” according to Dennis Lower, CEO of Cortex Innovation Community.

Founded in 2002 through a collaboration between Washington University in St. Louis, BJC Healthcare, the University of Missouri-St. Louis, Saint Louis University, and the Missouri Botanical Garden, the Cortex Innovation Community (CortexSTL.com) is the Midwest’s leading hub of innovation and technology commercialization, serving as the anchor of St. Louis’ growing ecosystem for innovative startup programs and established companies..