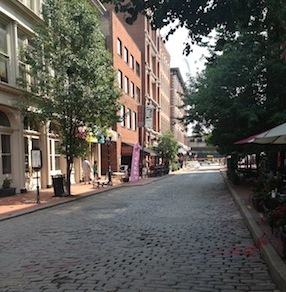 Laclede’s Landing is on the cusp of revival.

John Clark, president of Laclede’s Landing Community Improvement District, says more than $20 million in private investment is being pumped into the 9-block historic area just north of the Gateway Arch near the St. Louis Riverfront.

Tech startups, PR agencies, innovative casual dining establishments and residential lofts are evidence of what Clark calls a resurgence that the district has been waiting for a long time.

“We went through some odd times over the past decade, that’s for sure,” said Clark, referring to the Great Recession from 2007-09 and the 5-year, $380 million Arch Grounds redevelopment that involved closing a portion of Washington Avenue while the former Arch parking garage was demolished. “They say that to make an omelet, you’ve got to crack a few eggs…there were a lot of eggs cracked during that time, but now we’re beginning to reap the benefits of the completed Arch Grounds effort,” he added.

Advantes Development has invested $12 million to renovate Bi-State Development’s former headquarters at 701 N. First Street into the Peper Lofts, a 6-story community of 51 leased living units housed in the late 1800s edifice once known as the Christian Peper Building; the site was originally a 106,000-square-foot tobacco products storage facility. Peper Lofts, which are already more than half leased, represent the first multifamily development on The Landing. Peper is also home to part of Abstrakt Marketing’s staff.

At 707 North Second Street, another historic building – the Witte Hardware Building, built in 1849 – has been redeveloped by Drury Development Corp. ($2 million). The entire top floor of this 6-story, 80,000 square feet structure is occupied by Brand Addition.

“With the Arch Grounds redevelopment complete, it is a pivotal point for The Landing and the development activity is really taking off,” said Tom Milford, director of real estate for Drury Development Corp. “We’re excited to be a part of it.”

Restaurateurs are also making The Landing home, including a Korean fast-casual eatery known as Kimchi Guys. Clark, a former restaurateur, says dining establishments that did not survive the years of construction surrounding Laclede’s Landing are being replaced by bars and restaurants with a smaller footprint. “What you’re seeing and will likely continue to see are restaurants between 3,000 and 4,000 square feet locating on The Landing,” Clark said, “as compared to the 6,000- to 7,000-square-foot size we saw years ago. We’re also going to be seeing more restaurants than back in the day when there were more clubs and bars here.”

In mid-2016, the project to raise Leonor K. Sullivan Boulevard, a 1.5-mile stretch running beneath the Arch, by two feet as a flood mitigation effort, was completed, offering renewed access to The Landing as well.

Now that direct access to The Landing has been restored, increasing parking opportunities is a top priority, according to Clark. “We’re working with both parking companies that already have lots in The Landing – City Park (owned by Drury) and St. Louis Parking Co.,” Clark said. “We’d like to start on (surface) parking-related projects within 30 days. A parking garage is in our long-range plan.”