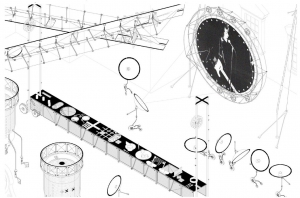 Architecture is often defined by the activities that happen within it. But the boundary between public and private wears thin. We eat in the car and sleep on the train. We congregate in commercial spaces. Social media blurs distinctions between personal and professional selves.

“There has been a migration from the right of property to the right of access and use,” argued Pedro Pitarch, winner of the 2016-17 James Harrison Steedman Memorial Fellowship in Architecture. “Spaces are no longer used according to their architectural program, but according to their protocols, their accessibility and their possibilities of empowerment.”

As Steedman Fellow, Pitarch will research the intersection of public and private spaces in cities across Europe, Asia and the United States. The $50,000 award, which is granted on the basis of applicants’ proposals, supports international travel for research. It is one of the largest such fellowships in the United States.

This year’s theme, titled “Adaptation,” was created by jury chair Mason White, a founding co-principal of Lateral Office in Toronto. Participants were challenged to explore how flexibility and adaptive response might be better incorporated into the design process.

Pitarch was chosen from a field of 100 applicants from across the United States and Canada as well as Argentina, Denmark, Finland, France, Germany, India, Spain and the United Kingdom.

“The jury was impressed with Pitarch’s range of experimentation and invention,” White explained. “Several jurors noted that both his previous work and the proposed research show an approach that is at once methodical, experimental and fantastically intricate. Additionally, the subject of property was found to be timely and relevant worldwide.”