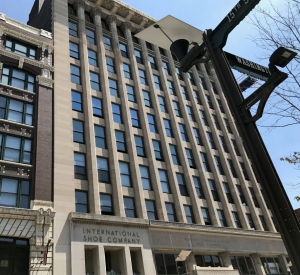 St. Louis’ Historic Garment District got a boost May 25 with city and nonprofit leaders announcing the next phase in this long-term, comprehensive redevelopment effort.

The east-west stretch along Washington Avenue from 18th Street to Tucker Boulevard was once among the largest U.S. clothing manufacturing hubs, second only to New York City. From the late 1800s to the early 1920s, revival-style buildings – designed by greats including Theodore Link and Albert Groves – bustled with activity in the manufacturing of domestic garments and related accessories. Post-World War II, a decline in garment production in St. Louis and elsewhere manifested in a series of vacant, multi-story, brick and stone buildings. Redevelopment so far in the district has included dining and entertainment venues as well as residential living options.

But thanks to 20 years of effort driven by what today is known as Downtown STL Inc., more than $6 million in public and private investment has been pumped into the Garment District and nearly all the buildings are occupied. The latest historic redevelopments include Paric Corp.’s restoration of the former CPI headquarters at 1706 Washington into Monogram – an urban living development – and Paric’s work-in-progress to repurpose the historic International Shoe Building at 1501 Washington into a shoe-themed boutique hotel known as Last Hotel. Together the two projects approach $100 million in development.

The State of Missouri’s adoption in 1998 of a tax credit for the redevelopment of historic buildings spurred the rehabilitation of large-scale renovation projects along the Washington Avenue corridor.

At Tuesday’s press conference, leaders from St. Louis City, Downtown STL and the Saint Louis Fashion Fund announced the city’s selection of New York-based Martinez+Johnson Architecture PC and development consultant BJH Advisors LLC as its choice to partner with St. Louis-based TAO + LEE Associates Inc. in leading efforts to continue rejuvenating the district in a plan that engages residents and businesses in the process. Downtown St. Louis Community Improvement District is funding $100,000 toward the planning and design work.

“Community engagement begins today,” said Missy Kelley, president of Downtown STL Inc. “Since 1998, more than 20 buildings here have been rehabbed, resulting in more than 700 new apartments and condominiums. And in terms of infrastructure, significant streetscape improvements along Washington Avenue have also been made.”

Once Monogram and Last Hotel are completed, Kelley added, all major buildings along Washington Avenue in the Garment District would tout redeveloped/occupied upper floors.

Linda Martínez, St. Louis deputy mayor for development, said the collaborative design venture is being propelled by a doable funding mechanism paired with a spirit of public involvement. “This is really about jobs and about the restoration of what was once a very vibrant area of downtown,” Martínez said. “This is not merely a plan. This is going to be a reality in the near future.”

Steven Stainbrook, associate principal and director of planning at Martinez+Johnson, said project partners are working to leverage the existing successes of the Garment District’s status within the Washington Avenue Historic District on the National Register of Historic Places to attract additional investment. “We want the Garment District to be a place where creative people want to be,” said Stainbrook. “We’re not here to start over. We’re here to continue the work that has already been done and to infuse fresh energy that coalesces around a vision. If we get this right in parallel with smart policy initiatives that build on the recent successes of the fashion incubator (Saint Louis Fashion Fund) and support development of a broader ecosystem of creative industries, we will have laid the groundwork for transforming this neighborhood.”

Martinez+Johnson was also part of the team that recently led the revitalization of New York’s garment district.

Peter Tao, principal of TAO + LEE commended the study that will gather public input for what the rehabilitated district will look like. “With so much construction activity and development in and around downtown, and with the near completion of the network of new and improved public parks, it is exciting to envision what the role of this district can be to enhance the area,” said Tao. “This placemaking planning study is very timely.”