A two-phase, $17 million heavy roadway and water line replacement project along the East St. Louis riverfront is complete, opening up and equipping more than 200 acres for commercial and industrial development.

The project – funded by three levels of government and numerous private industry partners under the direction of St. Clair County Chairman Mark Kern – has transformed what was a badly deteriorated span of roadways into infrastructure that can now easily carry trucks including those bound for agricultural giant Cargill in East St. Louis and Fairmount City-based Bunge-SCF Grain.

“Ag is one of the biggest exports of our region,” said St. Clair County Highway Engineer Norm Etling. “If these roadways would have continued to deteriorate, the access would have been severely restricted. Now there’s a continuous road system from I-70 and rebuilt Illinois Route 3, with a new ramp leading to Front Street All that is new infrastructure that provides excellent access to I-64/I-70 and is ready for significant new development.” 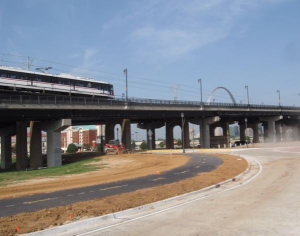 Baxmeyer Construction in Waterloo built the thoroughfares that were engineered by Swansea-based Thouvenot, Wade & Moerchen Inc.

TWM Project Manager Josh Stein said the roadway’s close proximity to the Mississippi River, just a few dozen feet east, added to the project’s complexity and included reestablishing drainage patterns. “Reconstructing a major industrial roadway this close to the levee system required close coordination with the U.S. Army Corps of Engineers,” he said. “Redesigning a somewhat confusing traffic pattern running past the Casino Queen (at River Park Drive and B Street) into a roundabout that is much easier to comprehend was a key objective of the project,” Stein said.