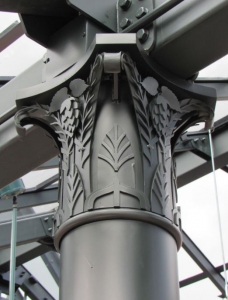 Schneithorst’s Restaurant & Bar, a landmark in the St. Louis restaurant scene for nearly a century, replaced its deteriorating heavy timber rooftop structure with a European-inspired steel and glass structure. Constructed by TROCO Custom Fabricators<http://trocofab.com/>, a premiere custom fabricator in the Midwest, the new rooftop structure consists of steel canopies with laminated glass roof panels that will allow customers to enjoy a unique outdoor dining experience, even during inclement weather.

TROCO collaborated with Mainline Group Architecture, Inc. throughout the design and fabrication process in order to create a European train shed theme with stylized detailing. Special attention was given to the intricate hop and barley metal work at the column capitals. Silhouettes which were cut using a waterjet, then layered and hand-formed to create the design elements. TROCO supplied and installed the laminated glass roof panels that provide shading, and applied a highly durable epoxy paint for the exterior matte finish. TROCO also led the coordination to provide cutouts in the structure for routing all the power, lighting and audio/visual requirements.

“It was a privilege to work on such a unique project for a popular restaurant that has been serving the St. Louis community for nearly a century,” said Tim Trotter, president of TROCO Custom Fabricators. “The new rooftop structure is built to offer customers the experience of a European-inspired beer garden, and will stand the test of Midwestern weather for decades to come.” 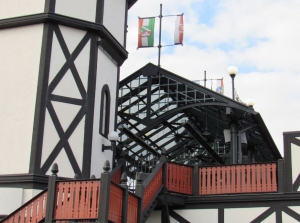 The roofing structure was assembled on-site and installed in July 2016. Schneithorst’s rooftop beer garden will open for the 2017 season in late-Spring. For more information, visit Schneithorst.com.

TROCO Custom Fabricators is a premier metal fabrication company specializing in Architectural and Structural Metal Fabrication. Established in 2002, TROCO is headquartered in St. Louis, Mo. to service the construction industry, both regionally and nationally.