A study released July 31 by labor market intelligence firm Greenwich.HR shows that the U.S. construction workforce is still recovering from the economic wounds inflicted 10 years ago when the housing bubble burst.

According to Issi Romem, chief economist at Orange County, CA-based BuildZoom, the construction industry continues having trouble finding enough workers to fulfill online job postings in all 50 states. The economist’s most recent study gauges the severity of the construction labor shortage, state by state, according to how long online job postings remain open over a period of 45 days.

In the study, Missouri ranks 12th from the top in terms of having outstanding residential construction job postings that remain unfilled after this period of time. Illinois ranks 13th, just above the U.S. average. At the very bottom of the ranking are Mississippi and Idaho.

Romem, whose firm teamed with Greenwich.HR to perform the study, says it underscores that a shortage of construction labor continues to exist 10 years after the subprime mortgage crisis and the ensuing financial meltdown. “Measuring the intensity of a shortage requires one to observe unmet demand,” said Romem. “One way of gauging a shortage that involves labor is to observe the difficulty of hiring workers. This study uses data about online construction job postings in order to observe the share of postings that remain online after 45 days. Nationally, the employment rate of construction workers has fully recovered from its tumble during the housing bust, but the construction workforce has substantially diminished,” he added.

From a high of 11.7 million construction workers employed across the U.S. in 2005, that number fell to 10.8 million workers in 2010. And despite the recovery in the years since, the size of the construction workforce continued to shrink to as little as 10.2 million in 2016, according to the study. 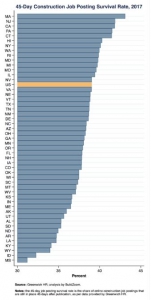 Ken Simonson, chief economist at the Associated General Contractors of America, says although the study ranks entire states rather than looking at metropolitan statistical areas, the research and resulting data does spark questions about the status of St. Louis’ construction workforce.

“I don’t hear of a lot of construction occurring in and around St. Louis, and yet I hear of the region’s high job posting survival rates,” Simonson said. “The data in this study show that there are a pretty high percentage of construction jobs going begging in Missouri and Illinois. Perhaps the construction jobs that are advertised online are of a specialty nature. It is also possible that St. Louis’ construction economy is relatively stagnant and that workers are leaving for opportunities in other states.”

“Unfortunately, resources are being diverted away from vocational programs in our high schools and graduates are being directed away from high-quality technical education programs because they aren’t part of the traditional college track,” Richter said. “Skilled trades in the construction industry offer great careers with an average hourly wage of $33 – plus $22 per hour in average benefits – but in the near future there may not be enough people with the right training and skills to fill these jobs.”

To view the study in its entirety, see https://www.buildzoom.com/blog/scar-from-which-the-construction-workforce-has-yet-to-recover#DM.