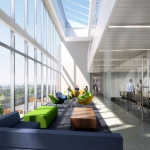 The Tarlton team is transforming Bryan Hall, dedicated in 1970, into a world-class facility consisting of high-end laboratory and teaching spaces for the Department of Chemistry in Arts & Sciences. The renovation will add more than 25,000 square feet of space for chemistry research, with additional spaces for existing research groups. On the first and second floors, the building’s vibration-sensitive design supports instrument-based chemistry. The third floor will eventually house radio/nuclear chemistry research laboratories, with the fourth and fifth floors home to fume hood-intensive synthetic laboratories as well as additional space for instrumentation-based chemistry.

Tarlton’s renovation of Bryan Hall began in May 2016 and will continue through to scheduled completion in December 2017, with occupancy of the building planned for spring 2018. Ayers Saint Gross is the project architect. Bryan Hall previously served as classroom and meeting spaces for the School of Engineering & Applied Science.

The renovation includes the reconstruction of the existing elevated span between Bryan Hall and chemistry facilities in McMillan Hall, allowing for office space, meeting space and better flow between the two buildings. The span is a connecting space but also serves as a critical gateway for students and visitors to access the inner portion of the campus. In addition, a new penthouse will house mechanical equipment to serve Bryan Hall. The equipment will serve an integral role in providing chilled water for the campus water loop. Work also includes the removal of the north face of Bryan Hall, the first of several buildings on the north end of the Danforth campus to receive a new facade as part of a multi-phase plan. The modern glass and a terracotta skin sunscreen system is designed to dramatically enhance the building’s appearance.

The renovation is part of “Driving Discovery,” Washington University’s multiphase initiative that will create new research and teaching facilities for the sciences on the north end of the Danforth campus.

“Driving Discovery will create an ecosystem – an interconnected community of scientists and students working in state-of-the-art facilities – that fosters innovation and collaboration,” said Barbara A. Schaal, dean of the Faculty of Arts & Sciences and the Mary-Dell Chilton Distinguished Professor in the Department of Biology in Arts & Sciences.

In business since 1946, Tarlton Corp. is a WBENC-Certified Women’s Business Enterprise that completes projects for wide-ranging clients in the life science, higher education, health care, commercial, power and industrial markets.

Tarlton Corporation, a St. Louis-based general contracting and construction management firm, has won one of the construction industry’s highest honors