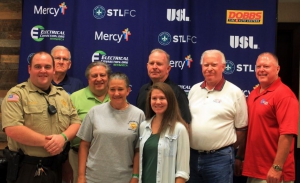 The Electrical Connection and Saint Louis FC partnership to raise funds for two holiday season “Shop with a Cop” programs will continue for the rest of the year.  A series of thunderstorms suspended the July 14, 2018 game to benefit the law enforcement trust building programs in Ferguson and St. Francois County.  That didn’t dampen the celebration of the programs or the fundraising.  See the St. Louis Post-Dispatch story on the game and the celebration.  The suspended game will resume on Oct. 10, 2018.

Before the bad weather moved in, pre-game ceremonies featured a “Shop with a Cop” video and introduced law enforcement officials from Ferguson and St. Francois County along with the Electrical Connection leadership which has supported “Shop with a Cop” for more 25 years. Fans received a limited edition 2018 holiday ornament commemorating the event for a donation.  Nearly $400 was raised during the weather dampened game.  The Electrical Connection is a labor-management partnership of the International Brotherhood of Electrical Workers (IBEW) Local 1 and the St. Louis Chapter, National Electrical Contractors Association (NECA).

For Dennis Gralike, director of the IBEW/NECA Electrical Industry Training Center, the need to change the mindset of skilled labor development is