Home builder Hibbs Homes is nearing the final stages of their Wildwood construction of a mortgage-free home for a local veteran and his family. The project is in partnership with Operation Finally Home. Each phase of this project has been made possible through donations of time and materials by local vendor partners. Now, Hibbs Homes is asking the public to help contribute to finish three rooms of the home – the Kids Rooms, the Living Room, and the Kitchen.

The community is invited to break ground on a new home for an American Hero, U.S. Army Spc. Heath Howes

“Could we build beautiful, comfortable homes that save homebuyers money every month from lower heating, cooling, and maintenance costs?”

This was the question management posed to their team of craftsmen at Hibbs Homes in late 2017. According to President and Founder Kim Hibbs, “Hibbs Homes has long been known for building some of the best, energy efficient homes in the St. Louis region, but we know that some clients struggle with the idea of investing in an energy efficient green home. Our hope is to find a way to deliver affordable options that would make building a green home a feasible option for more clients.” Hibbs adds, “To achieve this goal, we knew we’d need the right partners, and the right materials.”

Hibbs ComfortBuilt® homes, constructed with Owens Corning® advanced Building Science, will be built to a HERS (Home Energy Rating System) rating of 49, which means a potentially large reduction in homeowner heating and cooling bills, saving them money as well as increasing comfort and overall livability when compared to a typical new-build or resale home. Going above and beyond the required building codes for energy efficiency will be the standard for every Hibbs home, bringing science and technology into the construction process. This commitment to quality allows our ComfortBuilt® homes to deliver the full measure of advanced building science.

By adding the PROPINK Complete™ Blown-in Wall System, blown-in attic insulation, and ENERGYCOMPLETE® Sealant, Hibbs Homes is now able to prevent air leakage and related heating and cooling energy loss. The end result is that their clients can:

“We believe that the home of your dreams should be comfortable, durable, beautiful, and energy efficient. Ask us about Hibbs ComfortBuilt® options for your custom home building project. Our collaboration with Owens Corning Building Science Experts will drive our ability to make durable, energy efficient homes attainable in the St. Louis area,” notes Kim Hibbs.

“Owens Corning is an industry leader in building science knowledge and practical application that achieves performance targets for builders, and we’re excited to combine our expertise with a leading company as forward-thinking as Hibbs Homes,” said Achilles Karagiozis, Owens Corning Director of Building Science & Technology.

For more information about the recently announced collaboration between Hibbs Homes and      Owens Corning, please contact Hibbs Homes at 314-392-9631 or via email at info@hibbshomes.com.  Additional details regarding Hibbs Homes are available at HibbsHomes.com.

Hibbs Homes is a leading custom green homebuilder in the St. Louis area. Since leaving his career in broadcasting in 2006, owner and general contractor Kim Hibbs has been building high-performance and luxury homes for a variety of price ranges and lifestyles. Hibbs speaks to local building professionals and architecture students on a variety of green building topics. He built one of the first gold level green verified homes in the St. Louis area, and is the builder of the first Active House in North America. Hibbs is a Master Certified Green Professional through the National Association of Home Builders and is active in the St. Louis Home Builder’s Association where he currently serves on the board.

The community is invited to break ground on a new home for an American Hero, U.S. Army Spc. Heath Howes 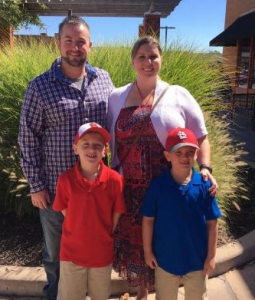 The community is invited to break ground on a new home for an American Hero, U.S. Army Spc. Heath Howes and his family in Hawks Rest in Wildwood, MO. The ceremony will take place Thursday, March 22, 2018 at 1:00 p.m.

Operation FINALLY HOME, Hibbs General Contracting and Hibbs Homes will join U.S. Army Spc. Heath Howes and his family to celebrate a groundbreaking ceremony at the site of the family’s future custom-built, mortgage-free home, Thursday (March 22) at 1 p.m. The community is invited to welcome Heath, his wife Savannah, and their sons to the Hawks Rest community in Wildwood, Mo.

Having grown up in a military family, U.S. Army Spc. Heath Howes always knew he would follow in the footsteps of his family members. On January 25, 2011, Howes traveled to Ft. Sill, Oklahoma, to begin Basic Combat Training and Advanced Individual Training to join the Field Artillery as a Cannon Crewmember. Following training, Howes received orders that he would be stationed at Ft. Bliss in El Paso, Texas. Eager to begin the next chapter of his life, Howes deployed to Afghanistan a few months later.

As he adjusted to military life abroad, Howes relied heavily on his faith to carry him through the tough days. Several months into his deployment, his combat outpost was attacked by a suicide bomber carrying over 1,200 pounds of explosives. Even though his unit was unharmed, Howes considers that day one of the longest of his deployment. On June 27, 2012, his truck was hit by a 200-pound IED (improvised explosive device) during a vehicle patrol. The driver, Howes’ best friend, and soldier sitting across from Howes were immediately killed, while Howes and his captain sustained life-threatening injuries. To this day, he cannot recall anything that happened following the explosion.

Howes’ injuries include post-traumatic stress disorder (PTSD), a traumatic brain injury (TBI), a spinal burst, fractured ribs, nerve damage in his left leg, severe right ankle fracture, collapsed lung and more. He was honorably discharged in January 2014. His wife, Savannah, serves as his primary caretaker, driving him to the nearest VA facility that is two and a half hours away and helping him in his wheelchair when necessary. Although recovery is a long process, Howes remains determined to continue healing physically, mentally and spiritually. In recognition of his courageous military service, Howes had been honored with numerous awards, including a Purple Heart, an Afghanistan Campaign Medal with two stars, two Combat Action Badges, an Army Commendation Medal and NATO Medal.

Since Howes is currently unable to work, he spends his time coaching his sons’ T-ball and baseball teams, giving him a sense of purpose. His goal is to teach the young boys hard work, discipline and sportsmanship. As Howes continues to receive rehabilitative care, his wife hopes to eventually return to pharmacy training. Howes grew up in the St. Louis area and is looking forward to returning to be closer to family and friends.

The Howes were surprised with the announcement they were receiving a new home at a St. Louis Cardinals game in September of 2016.

The home is being designed and built by Hibbs Homes.

Hibbs Homes is a leading custom home builder in the St. Louis area. Since 2004, the local builder has focused on custom and luxury homes for a variety of price ranges and lifestyles. For more, visit www.HibbsHomes.com.

Wildwood will soon be home to a unique living experience unlike any other in the St Louis area. The Timbers at Fox Mountain, a new home development spearheaded by custom home builder Hibbs Homes, will offer mountain resort-style timber homes in the heart of Meramec Valley, just minutes from I-44, in the sought-after Rockwood School District. The community will also be the first fully energy efficient community in the St. Louis region.

The community, launching in September 2016, will include just eight home sites, with finished home prices starting at $695,000. The Timbers at Fox Mountain is located in the Rockwood School District, and is centrally located while also being nestled away from the everyday hustle and bustle. Shopping, dining and entertainment options are abundant with historic downtown Pacific, Eureka and Wildwood town centers all within minutes of the community.

Private wooded lots will range from 3 to 14 acres and will provide homeowners with easy access to a range of outdoor activities such as hiking, biking, and horseback riding with close proximity to major parks such as Rockwoods Reservation, Pacific Palisades Conservation Area, Route 66 State Park and West Tyson County Park. The resort-style neighborhood is also just minutes from Hidden Valley Ski Resort. The location is a golfer’s dream with close proximity to some of the most impressive golf courses the state has to offer, including The Legends, Pevely Farms, The Aberdeen, The Crescent, and Fox Run golf clubs all located within minutes of The Timbers at Fox Mountain.

In addition to the one-of-a-kind landscapes available, the community will also offer truly unique timber frame home designs that are both rustic and luxurious. The team at Hibbs Homes will design each home to highlight the natural beauty of the scenery.

“The landscape here is so unique and beautiful that we wanted to create home designs that felt like an organic extension of the natural environment. We had a vision to create a community where the homeowners would feel as if they have their own getaway every day,” said Kim Hibbs, CEO of Hibbs Homes. “

Known for groundbreaking work in energy efficient, sustainable home building, Hibbs will launch the Timbers at Fox Mountain as a fully energy efficient community. Energy Star appliances and Energy Star rated windows will be standard in every home. Homeowners will have the option to further improve their level of efficiency with optional additions including Structural Insulated Panels (SIPs), upgraded insulation packages, geothermal heating and cooling systems and more.

Located off one-half mile off of Fox Creek Road on Model Realty Road in Wildwood, the community sales will begin in early fall in partnership with Tom Shaw Realtors and Coldwell Banker Gundaker in Town & Country. For more information on the Timbers at Fox Mountain, contact community agent Jan Hibbs at (314) 392-9631 x1 or visit TimbersatFoxMountain.com.

Hibbs Homes is a leading custom home builder in the St. Louis area. Since 2004, the local builder has focused on custom and luxury homes for a variety of price ranges and lifestyles.