The development known as Summerville at Francis Place broke ground in December 2020 and is expected to be completed in June 2022 with a phased move-in beginning next month.

The more than $20 million construction project includes 24 four-plex patio homes and a 6,000-square-foot clubhouse. The location is just north of Interstate 44 and west of Missouri Route 109 off Forby Road.

Bingman Construction Senior Project Manager Justin Bingman said one of the steepest challenges of the job thus far came in January, when crews had to break through an extensive amount of rock to prepare for foundational work early on.

Hercules Construction Management Vice President John Benoist said Geotechnology Inc. was brought in to perform geotechnical work in assessing the large rock shelf and other related conditions prior to the project’s official start.

Susan Bruker, principal and architect at Lawrence Group, said the project’s owner, St. Andrews, had seen a patio home living community in Portland, Oregon that was built into a hillside; that was the inspiration for Summerville at Francis Place. The Lawrence Group and Hercules met with the architect who designed the Portland project to gain information on how to make the Eureka project happen.

“In between the steps, Summerville features beautiful pocket neighborhoods,” she said.

Each fourplex features a typical floorplan totaling 1,000 square feet with one bedroom, a den, full kitchen and two bathrooms.

Crews have completed the siding on two of the buildings and are finishing the third building this week, Bingman said.

Developer Steve Smith and film/TV movie producer Monica R. Butler are in the pre-planning and funding phase of a project that will restore a 1907 church in the Central West End and establish it as the Gospel Music Hall of Fame of Missouri.

Smith, CEO of Lawrence Group and head of its affiliate, New + Found, is the developing the project. Lawrence Group will provide design and construction services.

Once the site of Second Baptist Church, the 40,000-square-foot building is structurally sound but needs considerable restoration, Smith said. It’s located at 500 North Kingshighway Blvd. on the northern fringe of the Central West End, one block south of Delmar Blvd.

“This is a complicated and ambitious project, both physically and financially,” said Smith. “We’re early in the design phase now. It’s a wonderful initiative to preserve this legacy architecturally and to revive the rich history of what transpired within the walls of this beautiful building.”

Butler’s life-long involvement with gospel music took root in this building. “My mother sang and recorded with the famous gospel group, The O’Neal Twins,” she said. “I experienced it all being in the studio with them as they recorded and I was in the 1982 documentary, ‘Say Amen Somebody,’ that was filmed here in St. Louis. Many gospel music legends hail from St. Louis, some who are still alive today.”

Design of the future hall of fame and cultural arts center includes three main components, according to Smith: 1) a museum – located in the former sanctuary space – that will offer exhibits specific to gospel music history; 2) an education component featuring classroom and theater space; and 3) an event and production space.

The picturesque adjacent garden is also envisioned as a site for galas, wedding receptions and other gatherings.

Writer/producer Lin Woods, executive director of the Missouri-based Inspired Lives Foundation, says Missouri plays an integral role in gospel music as a business. “Before that, it was a genre,” Woods said. “Years ago in this very church, Pastor David Epley began hosting live gospel concerts. He was the first preacher to open this church to that. We’re doing our part to keep gospel music alive here in St. Louis.” 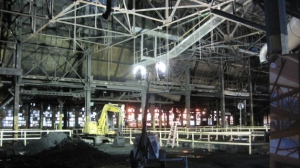 The Lawrence Group and FoPa Partners showed off plans for the City Foundry Saint Louis project gave tours of the nearly 90-year old foundry building in St. Louis’ burgeoning Midtown neighborhood to a couple of hundred people at a “sneak preview” Thursday evening.

The master plan for the 17-acre project calls for a four-phase redevelopment, beginning with the historic foundry building.

Phase 1 also would include infrastructure work to support the later phases and conversion of an elevated railway spur into a walking and biking trail into the heart of the development. The site on the north side of the foundry building will be lowered by about eight feet so that people will enter the foundry at floor level instead of one level above the floor.

Phase 2 is intended to be a 380,000-square-foot, 24-story apartment tower on the northwest corner of the site. 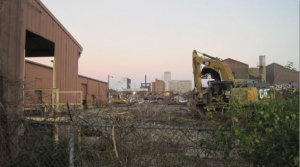 Phases 3 and 4 would be new office towers, totaling 280,000-square-feet, with associated parking and street-level retail.

SCI Engineering is the environmental consultant. Midwest Services Group is abating the hazardous materials, which include asbestos, lead, and other heavy metals.