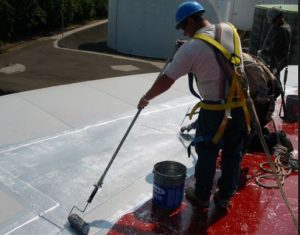 Advances in building materials are enabling specialty contractors to work even more efficiently and seamlessly with contractors and their subs on the job site.

St. Louis-based Superior Waterproofing & Restoration Co. Inc. President and Owner Tom Schmitt says that as commercial building materials evolve and improve at the speed of light, so do the methods by which they’re applied and installed.

“We cross over as a specialty contractor,” said Schmitt. “For example, although we don’t work in roofing, we do work with fluid-applieds…we do green roofs, and so do the roofers, the United Union of Roofers, Waterproofers and Allied Workers Local 2.”

In terms of skill sets, the expertise it takes to create a foundation – a horizontal slab under the ground covered with dirt – is essentially the same talent that is needed to install a roof, Schmitt says.

“We define ourselves as a specialty contractor,” he said. “We routinely do fluid-applied balconies and elevated parking decks, the latter of which is basically a roof that you’re able to drive on. The way designs are these days – and in light of all the advances in building materials – it’s possible for several different trades and specialty subs to overlap as to whom is capable of performing a specific task. With regard to who does what work, it has really gotten more confusing. But it has also afforded building owners an opportunity for their projects to move forward, stay on track and stay within budget, regardless of how tight the St. Louis construction workforce is at any given time,” he added.

Whereas in the past a company such as Superior Waterproofing & Restoration would self-perform tasks involving roll-ons, fluid-applieds and peels-and-sticks, Schmitt says these days most construction managers assign the task to subcontractors to avoid confusion and congestion on the job site.

“Various trades including the carpenters, painters and bricklayers are generally the ones getting in there and performing this type of work,” Schmitt said, “with the exception of the EIFS (exterior insulation and finishing system) people. They generally perform their own work because there are big warranties involved with it. Pretty much whatever trade claims the work depends upon what material is going on.”