If you attended or watched the historic 100th PGA Championship in St. Louis, you marveled at the precision golf shots.  Behind the scenes, equally impressive precision by Electrical Connection members powered the event and connected it to a worldwide audience.  Contracted by Aggreko, an international electricity, heating, and cooling provider, NECA contractor Guarantee Electrical Co. teamed with IBEW Local 1 to power every facet of the championship.

“The PGA was a spectacular showcase for St. Louis worldwide,” said Jim Curran, executive vice president, Electrical Connection.  “We are extremely proud of our IBEW/NECA team which for decades has been the region’s ‘go to’ source for reliable and safe electrical and communications infrastructure needed for major events.   The PGA and Bellerive Country Club delivered a great tournament for fans and we were pleased to be part of it.”

The tale of the tape on the sprawling Bellerive Country Club in Town & Country, Mo. and its 7,547-yard course also tells the tale of the enormous challenge of transforming the private club for a worldwide spectacle. The event was almost entirely powered by generators. 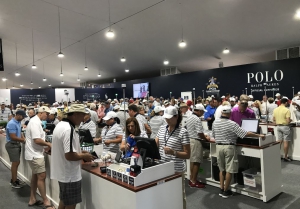 Equally impressive were the accommodations for the media and the estimated 1,000 journalists covering the event.  The IBEW/NECA team provided temporary power to the massive media center and stationary cameras covering the action on the course.  In addition, the temporary power was used to support media using wireless connections for roaming camera crews and journalists on the course. 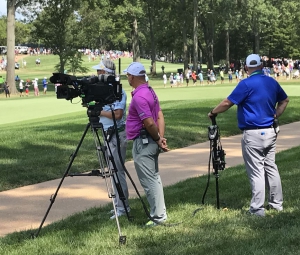 Guarantee began work on the project a year ago by connecting temporary power from an Ameren feed to the PGA trailer from which the entire championship was orchestrated. To insure uninterruptable power for this major event, a backup generator was provided to the Bellerive clubhouse.

The PGA project was yet another in a series major St. Louis area events wired by the IBEW/NECA team.  Indeed, Guarantee Electrical traces its name to its “guaranteed performance” wiring of the 1904 World’s Fair.

The Electrical Connection is a partnership of the International Brotherhood of Electrical Workers (IBEW) Local 1 and the National Electrical Contractors Associations (NECA).  For more than 100 years, IBEW/NECA has been the “go to” resource for safe and reliable electrical and communications construction, maintenance, repair and replacement services across Missouri, the nation and the world.  For more information, visit www.electricalconnection.org.

For Dennis Gralike, director of the IBEW/NECA Electrical Industry Training Center, the need to change the mindset of skilled labor development is