Proposition D – a measure that would allow for a graduated 10-cent increase in the motor fuel tax over the next four years – would generate an estimated $400 million annually to keep pace with the costs of maintaining existing thoroughfares statewide. Of that total, $288 million would go to Missouri’s state road fund for road and bridge construction; $123 million a year would be allocated to local governments across Missouri for municipal road construction and maintenance. 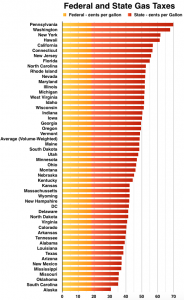 Associated General Contractors of Missouri President Len Toenjes says the proposed motor fuel tax increase is long overdue. “Proposition D is the first bite at the apple,” Toenjes said. “The last time Missouri saw any increase in motor fuel tax was back in 1996. It was 17 cents then, and it’s still 17 cents now, but due to inflation its buying power has decreased to 7 cents. Passage of Prop D basically resets the clock and sort of gets us back to where we were at that time. Maybe in 4 to 5 years we can propose enhancements to our statewide infrastructure. Prop D will cover the basic but vital needs of our existing roads and bridges.”

The Missouri Legislature approved HB 1460 on the final day of regular session in May. Within this bill is a provision to increase the motor fuel tax if voters pass the referendum.

Increased motor vehicle fuel efficiency and the ability to drive farther with less fuel is having a negative impact upon state revenues – federal, too – that are generated by motor fuel taxes when drivers fill up at the pump. Toenjes says the proposed increase will be negligible for the average driver but essential to a state whose transportation infrastructure needs are deep.

“It means more money for local needs and state needs, too,” Toenjes said. “What most people don’t realize is that the Missouri State Highway Patrol is funded out of the motor fuel tax to the tune of a couple hundred million dollars every year.”

Prop D’s proposed motor fuel tax increase could potentially fund a portion of the replacement of the highway bridges along the Interstate 270 corridor, from the Missouri River to I-70. “That’s a critical freight corridor, and those bridges are 60 years old,” Toenjes said. “That project alone totals $750 million.”

“Passing Proposition D would help our building trades workers by fixing our local and statewide transportation infrastructure,” Stiffler said. “No doubt, it’s long overdue. The residents of the state of Missouri greatly deserve this.”