In a turn of events brokers have not seen in more than a quarter century, brokers are seeing industrial space bringing in a higher dollar than Class A office space.

Such was the message disseminated by Patrick Sentner, 2022 global president of the Society of Industrial and Office Realtors, as he presented at SIOR St. Louis’ 37th annual Metro Market Forecast event on March 9. Sentner, executive vice president in the occupier group at CBRE in Pittsburgh, said the phenomenon is a byproduct of the uncertainty as to companies’ near-future need for office space.

“We are going through the biggest change in real estate, on all fronts, in my 26-year career,” said Sentner. “The biggest question everyone is asking is, ‘When are we going back to the office, and what is it going to look like?’”

Office landlords are seeing rising rental rates with annual escalations and longer-term leases, he said, but to achieve this, landlords are offering large upfront free rent and much higher tenant improvement allowances so companies can build amenity-rich, collaborative spaces to meet with clients, bring their people back to the office and recruit more workers.

As office remains in flux, demand for industrial space – even older, less desirable buildings – is soaring, Sentner says. “The economics are blowing me away,” he said, sharing an example of a 50-year-old, not-yet-updated warehouse selling at a 2.23 percent capitalization rate. The cap rate is a real estate valuation measure that’s a ratio between annual rent income produced by an asset – such as an industrial building – to its current market value. Sentner also shared a recent example of an industrial broker who was receiving multiple offers of $8 million an acre for an old industrial site.

“This is not currently the scenario in St. Louis or Pittsburgh, but these are the trends that will eventually come our way,” he said. “We are now seeing office space going for less than industrial space.”

Milwaukee, Detroit, St. Louis, Memphis and Philadelphia are the top markets where Ten-X Research estimates that market conditions might cause retail investors to consider selling their properties. These cities reflect several lagging economic and demographic indicators in the Midwest and Northeast, where stagnating wages and lackluster growth outside of the major urban cores have made for a weakened retail climate.

The long-term forecast reveals Austin, Miami, Fort Lauderdale, West Palm Beach and San Francisco as markets in which investors should consider buying retail assets. These markets, concentrated largely in the Southeast and West, are being fueled by robust local economies, where a steady influx of new residents are able to find jobs and fuel overall growth.

The Ten-X Research report notes that 13 percent of all retail sales are now conducted through e-commerce – a share that is expected to climb in the years to come. This has impeded demand for retail space, but the very low level of new retail construction means that absorption will outpace new supply nationally over the next two years. The result will be continued slow recovery in vacancies, though research indicates demand may begin to dry up by 2019, pushing vacancies back above 10 percent and close to recession-era peaks.

“As more consumers opt to do their shopping online, the retail market is battling major headwinds as it crawls toward a comeback after the downturn,” said Ten-X Chief Economist Peter Muoio. “Strong economic conditions in certain regions are propping up the sector nationally on a statistical level, but this lasting shift in behavior will remain a stubborn impediment to the retail industry in the years to come.”

During the quarter, a modest uptick in demand pushed rents up 2.1 percent year-over-year and vacancies fell by 20 bps to just under 10 percent. Overall deal volume in the sector fell to $17.6 billion during the second quarter – a 10.3 percent reduction from the same period in 2015. 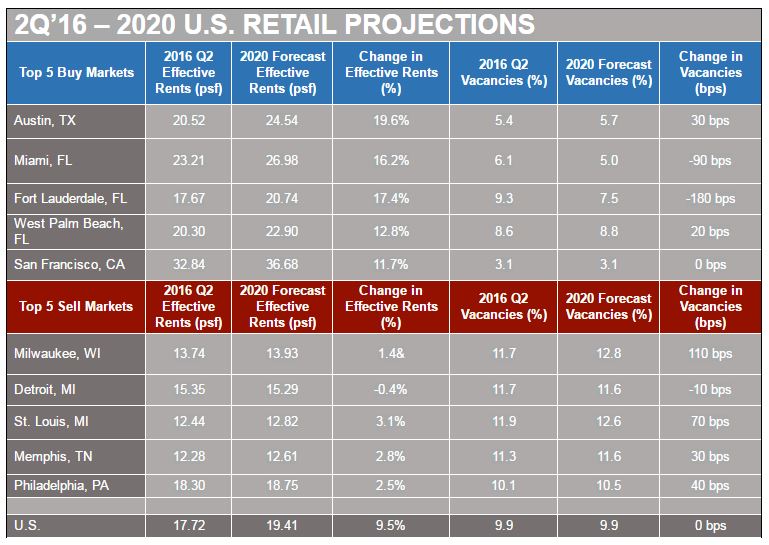 Austin’s economic fortunes continue to soar, making it an ideal spot for retail investment. Local employment has grown between 3 and 5 percent over the last five years and shows no signs of slowing, while population growth has more than tripled the national rate for more than a decade. Coupled with a thin supply pipeline, strong demand for retail in the area is poised to drive vacancies below 5 percent by 2018, and rents are expected to rise by more than 4 percent over the same period.

Burgeoning leisure and hospitality industries have been powering Miami’s swift recovery from the recession, helping to push overall employment to an all-time peak. While unemployment is still hovering slightly above the national rate, it has dropped drastically from its pre-recession peak. The city’s retail sector has been thriving, with rents climbing more than 4 percent over the last year. Vacancies are expected to dip as low as 4 percent by 2018, and a dearth of supply additions on the horizon puts buyers in position to capitalize on the strong market.

Retail conditions are also inviting in Miami’s neighboring city to the north, Fort Lauderdale. Though vacancies and rents have been mostly stable over the last year, a steady stream of supply is expected to dry up in the near future, pushing the market sharply in the right direction. The city’s recovery from the recession has been robust, and unemployment is currently just above 4 percent – well below the national average. Ten-X Research data indicates strong population growth and job projections are likely to set investors up for annual NOI growth of about 4.2 percent through 2020.

The third South Florida city to make the ‘Buy’ list, West Palm Beach is benefitting from escalating population growth and steadily increasing employment numbers, each of which outpaces national averages. Retail demand is strong enough to withstand healthy additions to supply, and Ten-X Research forecasts that it will pull vacancies below 7 percent by 2018. Rents should continue an accelerating growth pattern over the same period, and steadily improving fundamentals show NOI will continue to grow at close to 4 percent.

The surging tech sector in and around San Francisco continues to make the city a solid bet for investors. Employment has taken off since the recession, with job growth averaging better than 4 percent per year and unemployment hovering just above 3 percent. Coupled with an empty supply pipeline, the continued boom projects to lower vacancies to 1.9 percent by 2018 – a historical low. While overreliance on a single sector can make a metro market particularly volatile, data suggests rents are poised to climb in the coming years, pushing NOI up roughly 3.2 percent each year.

Despite an unemployment rate below the U.S. average, Milwaukee is hampered by a struggling economy, including tepid employment growth and near-stagnant population levels. Ten-X Research predicts that the city will continue seeing lukewarm demand for retail space, and with 650,000 square feet of product hitting the market, vacancy rates will stay above the mid-11 percent range in the next two years. The influx of supply will limit rent growth to less than 1 percent per year through 2018, and annual NOI gains are expected to average a meager 0.4 percent through 2020.

Detroit’s population is growing for the first time in a decade, but the city’s total employment remains more than 10 percent lower than its prior cyclical peak, in part due to the muted comeback of the city’s manufacturing sector. Even with limited supply coming to market, the report indicates that middling retail demand will nudge vacancy rates into the high-10 percent range by 2018, before the market enters a projected downturn. Ten-X Research predicts that rent growth will average just 1.2 percent over the next two years before declining in a cyclical downturn, while NOI growth is expected to average 0.5 percent per year through 2020.

St. Louis’ metro population growth has lagged behind that of the U.S. for several decades, measuring 0.2 percent in 2015. While the city has surpassed its previous peak in terms of total employment, St. Louis job growth is expected to be 1 percent per year through 2018. The city’s retail market will see modest supply additions in the coming years, but the report notes that weak demand will likely keep vacancy rates at or above the mid-11 percent range over the next few years. Ten-X Research predicts effective rents will grow by 1.3 percent per year through 2018 before falling, while NOIs will grow by 0.8 percent annually through 2020.

Buoyed by a transportation/utilities sector which set a new peak level for employment in 2016, Memphis’ total employment numbers are 1.4 percent below their prior highs. The city’s retail supply pipeline is limited, but Memphis’ population grew 0.1 percent in 2015 — a metro that has lagged behind the country in this measure for nine straight years. Ten-X Research projects vacancy rates will remain above 10 percent through 2018 before increasing more drastically. Effective rent growth faces a similarly bleak outlook, with projections averaging 1.3 percent over the next two years before declining during 2019 and 2020.

Philadelphia’s economy is accelerating, with payrolls 2.5 percent higher than their prior peak, but the city’s population growth slowed in 2015 and its unemployment rate remains higher than the U.S. average. Even with a modest supply pipeline, the city’s limited demand for retail space is expected to keep vacancy rates hovering over 10 percent in the coming years. Ten-X Research projects effective rents climbing just 1.6 percent per year through 2018 and annual NOI growth of 1 percent through 2020.

By KERRY SMITH, EDITOR, ST. LOUIS CONSTRUCTION NEWS AND REVIEW MAGAZINE In a turn of events brokers have not seen