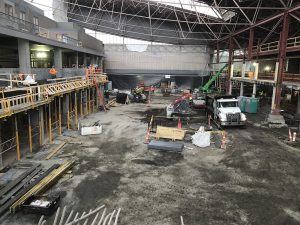 What holds more than one million gallons of water, spans 120,000 square feet and promises to educate and fascinate all ages?

The St. Louis Aquarium at Union Station in downtown St. Louis, on schedule to open in late 2019.

“The Shark Tank alone will hold 250,000 gallons of saltwater,” said Shawn Brinker, project manager for McCarthy. “Visitors will walk through a switchback tunnel designed with radiused, deep-water acrylic panels – some as large as 16 feet by 18 feet – that will enable them to get an up-close look at aquatic creatures for an exciting, virtual-immersive experience.” 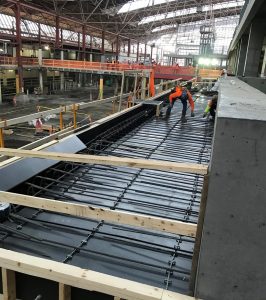 Extensive demolition of what had been Union Station’s food court and mall to make way for the aquarium proved to be a steep challenge when work began November 2017. Brinker said working off as-built drawings dating back to the late 1800s made existing condition coordination, work sequencing and planning essential. “Subsurface conditions associated with the design and construction of three miles of piping systems also made the work extremely challenging,” he said, noting that complex piping up and above standard mechanical-electrical-plumbing infrastructure was necessary to support the more than 250 species of aquatic life. LSS (life support system) piping was a major portion of the work.

The aquarium is zoOceanarium’s first project located in the U.S.

The construction workers from McMcCarthy Building Companies, Inc. who are busy building the new St. Louis Aquarium at Union Station took a fun, well-deserved break to reach out to all the “Baby Shark” song lovers in St. Louis and beyond. Here’s the link:

The St. Louis Aquarium at Union Station will open in late 2019. The 120,000-square-foot aquarium will include one-of-a-kind exhibits and tanks featuring thousands of aquatic animals from the rivers and oceans of the world housed in 1.3 million gallons of water. It will bring together state-of-the-art technology, animal care, education and conservation with the excitement of aquatic creatures. The two-story aquarium — built inside the footprint of a nearly 500,000-square-foot, 19th century iron umbrella train shed that is designated as a National Historic Landmark — is a key piece of the $160 million family entertainment complex planned for Union Station by the station’s owner, St. Louis-based Lodging Hospitality Management (LHM).

By KERRY SMITH, EDITOR, ST. LOUIS CONSTRUCTION NEWS AND REVIEW MAGAZINE What holds more than one million gallons of water, 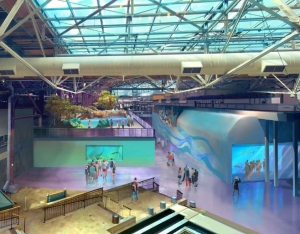 Ryan Freeman has joined PayneCrest Electric, Inc. to serve as president.  PayneCrest is one of the St. Louis area’s largest electrical contractors serving