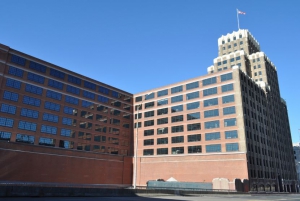 Integrated Facility Services (IFS) has begun work on a nearly $10 million ($9,818,910) HVAC, plumbing and fire protection renovation project at the Robert A. Young Federal Building in downtown St. Louis. The project is part of a $62 million design-build seismic retrofit of the historic 20-story building led by McCarthy Building Companies, Inc., the design-build contractor.

The 1.05 million-square-foot Robert A. Young Federal Building is located within 150 miles of the New Madrid fault, one of the largest known earthquake faults in North America. IFS is relocating, replacing and bracing mechanical systems, VAV boxes, HVAC ductwork, fire protection and plumbing to accommodate the new structural steel braces and seismic dampers being installed.

The Robert A. Young Federal Building, built in 1933, is owned and managed by the U.S. General Services Administration. The building is 98 percent occupied by nearly 40 federal agencies, with more than 3,000 workers. The design-build team is working to minimize disruption while renovating the building for enhanced safety during and after a potential seismic event. The project is scheduled for completion in late 2018.

McCarthy Building Companies, Inc. is one of the nation’s premier commercial construction companies. Founded in 1864, the firm is currently the 17th largest builder in America.

Integrated Facility Services (IFS) has completed design-build plumbing and HVAC work on The Boulevard Senior Living of St. Charles, which