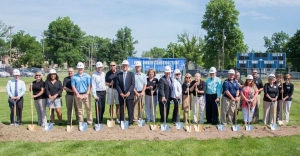 The dream of a new athletic stadium for Westminster College took the first step today as college and local officials gathered with approximately 100 supporters on Priest Field to break ground for the new facility.

“This is truly a great day for the Blue Jay Nation, and I want thank all of you who came out to help us celebrate this momentous event,” Westminster President Fletch Lamkin told the gathering. “We have always said that one of Westminster’s biggest calling cards for perspective students is our magnificent and historic campus. Watch our dust in the months ahead as we take another giant step forward in building the Westminster of the future.”

The project was made possible by a generous $4 million gift by Westminster alumnus Kent Mueller ’62 and his wife Judy from Paradise Valley, AZ.

Unfortunately, the Mueller’s were unable to attend the ceremony.

“Kent and Judy Mueller believe Westminster athletes deserve a facility worthy of their talents, and that is why we are here to celebrate this groundbreaking today,” President Lamkin stated. “My one regret is that Kent and Judy are not able to be with us to share in this celebration, and the first step in making athletic events at Westminster a first-class experience for all the students, parents, alumni, and community members who come out to support our Blue Jays.”

“This is an exciting time for our Athletic Department, our student athletes, as well as our entire campus community,” said Westminster Athletic Director Matt Mitchell at the ceremony. “The generous gift made by Kent and Judith Mueller will have a transformative impact on the future recruitment of success oriented student athletes to our institution. The field and stadium will benefit all of our student athletes as they continue to compete in the sports that they love.”

Mitchell also stressed the space would be available to the entire campus community with space for general exercise as well as a walking track.

This new stadium will be a boon to our college,” Trustee Jane Bell stated in her remarks. “This generous gift from the Muellers is another sign that there are so many people invested in Westminster and its future.  This stadium will show our current and future students that we care about them and their experience here.  When we invest in what our students experience every day on campus, they know we want them here.”

Following the formal ceremony, the platform party donned hard hats and were joined by members of the Callaway Chamber of Commerce Ambassadors to officially break ground on the project.

The field itself with new artificial turf is scheduled to be completed for fall 2018 football season.

Founded in 1851, Westminster College in Fulton, MO is one of the top liberal arts colleges in America, according to major educational ranking firms, including U.S. News & World Report, Forbes magazine, The Princeton Review and Washington Monthly.To find out more about Westminster College, go to http://www.westminster-mo.edu/.