Tarlton Corp., a St. Louis-based general contracting and construction management firm, completed renovation of and constructed an addition to the Stephen and Peter Sachs Museum at Missouri Botanical Garden.

Tarlton served as construction manager on the 7,000-square-foot museum, which is listed on the National Register of Historic Places. The main level of the pre-Civil War, red brick building offers expanded space for exhibits of artwork and other displays. Updates include a light-filled lobby, renovated lower-level gallery and new staircase that links the two floors. A new architectural addition, which safeguards the integrity of the historic building and surrounding environment, connects to the existing structure. The addition houses new public restrooms, fire stairs and an elevator, providing accessibility in accordance with the Americans with Disabilities Act. It was designed in accordance with preservation principles outlined by the Secretary of the Interior’s Standards for the Treatment of Historic Properties and U.S. National Park Service.

The museum, widely considered one of the most historically significant buildings in the Midwest, opened in 1859 – the same year the Garden officially opened its doors to the public. It housed the Garden’s original library, herbarium and natural history specimens. The building had been closed to the public for more than three decades. 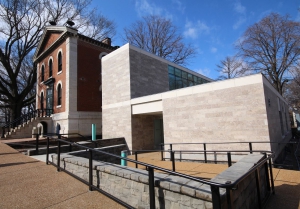 At the project’s outset, the interior restoration was conceived to closely align with the era of Henry Shaw, St. Louis businessman and founder of the Missouri Botanical Garden. The scope of work included restoration of the building’s original tile floor and stripping layers of paint from bookshelves. Energy-efficient upgrades include the installation of insulated glass in the building’s original windows and a new HVAC system.

As the final budget was being developed, the Tarlton team removed part of a plaster drop ceiling in the building’s first-floor rear south room. It was there that crews uncovered hidden pieces of the Garden’s history: the original barrel vault ceiling, which featured the painted portraits of noted botanists George Engelmann, Carl Linnaeus and Asa Gray. The design-construction team was tasked with reconfiguring the mechanical systems on the floor directly above the portraits, suspending the systems above the barrel vault ceiling to minimize vibrations. The team worked with restoration experts, as well as conservators with the U.S. National Park Service, to preserve the portraits.

The building was designed by noted St. Louis architect George I. Barrett, who also designed Shaw’s country home (known as the Tower Grove House), as well as Shaw’s mausoleum situated on the garden’s grounds. The museum was named for brothers Stephen and Peter Sachs in honor of the family’s support for the restoration. A wide range of generous donors also contributed to the restoration.

“The restoration of the Stephen and Peter Sachs Museum was so well done,” said Dr. Peter Wyse Jackson, president of Missouri Botanical Garden. “The historic nature of the building remains, and we are thrilled to welcome visitors to the Museum Building again.”

The museum renovation was the second Tarlton project for Missouri Botanical Garden. The firm garnered a 2017 Quality Concrete Award from the Concrete Council of St. Louis for the replacement of the iconic bridge in the Climatron®, one of the Garden’s most popular attractions.

Edwardsville Resident & Builder To Retire From Tarlton And Grow His Company