About 10 years ago, I became a member of the Courthouse Access Advisory Committee, an august group of architects, accessibility experts, code experts, building operators, judges, court managers and lift manufacturers. We were assembled by the U.S. Access Board to develop best practices on integrating standards issued under the Americans with Disabilities Act (ADA) into the design of courthouses and published the final report, “Justice for All: Designing Accessible Courthouses,” in 2006.

The Will County Courthouse features 6-foot-long ramps integrated inside the courtroom to the witness stand, jury box and clerk, and in the private corridor between the judge’s chambers and jury deliberation rooms.
Since then, I have had the honor to observe many existing courthouses and helped plan the renovation and new construction on several others. The lack of accessibility in existing courthouses is never more obvious. Meanwhile, many courts have hired accessibility experts and implemented accessibility improvements within the limitations of their buildings by adding ramps, lifts, power door operators, lowered public counters and remodeled toilet facilities.

Designers of new courthouses have embraced the ADA Standards and integrated access with trauma-informed design, wayfinding and sustainability to provide a better experience for the public and a superior environment for staff within basic courthouse planning principles. The requirement to comply with ADA Standards began in 1992. The current ADA Standards, which were updated in 2012, include several specific provisions for courthouse and detention facilities.

The ADA addresses access to public spaces as well as to employee areas. ADA Standards require that all courtrooms comply in new construction and address access to jury boxes, witness stands, judges’ benches and other courtroom spaces. Universal Accessibility has also become a natural progression adopted by many jurisdictions. With Universal Accessibility, the accessible path is used by everyone, is direct and eliminates the need for separate stairs at entries and corridors.

Universal Accessibility principles were used in several of HOK’s most recent courthouses.

For example, the new Will County Courthouse project in Joliet, Ill., which is nearing the end of the contract document phase, features a 38-court, 10-story structure that includes a raised private corridor to provide wheelchair access. The private corridor is raised 12 inches. Six-foot long ramps are also integrated inside the courtroom to the witness stand, jury box and clerk, and in the private corridor between judge’s chambers and jury deliberation rooms. 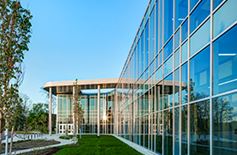 In addition, the Gull Road Justice Facility in Kalamazoo, Mich. — primarily a family court attached to an existing juvenile detention facility, which was completed in January 2016 — also uses Universal Accessibility principles. The three-story structure uses the sloped site to provide a public entry on the middle floor. High-volume spaces including a public counter with Friends of the Court and clerk functions and six hearing rooms are concentrated on this level. The upper floor has four full courtrooms and district attorney offices. The bottom level has the staff entry, a staff commons providing break, meeting and alternative workspace, and the probation department and court holding. Access to natural light is optimized for wayfinding and reduction of tension within the courthouse.

For the Gull Road Justice Facility, HOK and Tower Pinkster worked with the court on height requirements within litigation spaces. The hearing rooms are all on one level. In the courtrooms, the judge’s bench is raised 18 inches and clerk, witness stand and front tier of the jury box is also raised 6 inches. The rear private corridor was raised 18 inches along with the judge’s chambers and support areas. This allows the judges to enter directly from their chambers without stairs or ramps. The corridors between the public and private corridors permitted space to ramp between the two. Integrating the ramping into required circulation reduced area and cost while reinforcing natural movement.

If you need a refresher on courthouse accessibility, sign up with the U.S. Access Board for a free webinar on July 6 from 2:30 to 4:00 p.m. (Eastern Standard Time), which will review requirements in the ADA and Architectural Barriers Act (ABA) Accessibility Standards for courthouses. Visit www.accessibilityonline.org for more information or to register for the webinar.