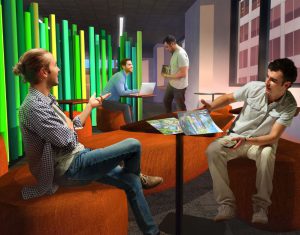 PGAV Destinations is thrilled to announce the completion of a year-long, $3.2m renovation of its 200 N. Broadway studio in Downtown St. Louis!

The project has nearly doubled the space for this expanding of the attraction design firm, creating a dynamic two-floor environment that features fun and thematic collaborative areas, all with fantastic views of the St. Louis region.

“We’ve been growing at nearly 10% for several years now; and not just in staff count, but in our philosophy as well – how we work, how we collaborate, and the importance of our health and fitness,” said Emily Howard, PGAV vice president and project lead. “We considered relocating the office elsewhere in the city; but after a lot of discussion and reflection, we decided to reinvest in the downtown Creative Core, and transform our current space into something greater.”

PGAV Destinations collaborated with its Kansas City practice PGAV Architects on the design of the new space. The PGAV team began by surveying all current staff to gather input about what they’d like to see in the renovated space. A small, internal task force was comprised of designers, architects, IT professionals, and HR representatives of varying ages and outlooks and provided diverse thinking for the redesign.

“Employee input was absolutely essential to the process, first because it gave us a lot of great ideas, because we employ so many creative people,” said Howard. “Second, it was so impactful because it generated sincere staff buy-in to the project – employees knew they had a real say in what we would develop, collaboratively.” Howard confirms the team was able to implement most of the doable suggestions that staff submitted, with the exception of a few “farther fetched” ideas, such as a tube slide that would exit the exterior of the building and circle back inside.

For over half a century, PGAV Destinations has designed zoos, aquariums, museums, theme parks, and resorts around the world, and much of that creative spirit and theming is evident in the renovated office space. After assessing and planning for the more  critical, practical components of the project – flexible working space for standing or sitting, more conference space, enhanced hospitality for staff and guests, dynamic spaces, and expanded spaces that could “house” the entire growing  staff – the team implemented creative themes throughout the floors.

Generally separated into guest spaces and the studio, the new conference rooms were named after elements of the firm’s various hallmark projects – like Space Shuttle and The Veldt – prompting storytelling opportunities and hearty spurts of creativity, explained Howard. Frosted glass and wall art throughout the office illustrate zoo habitats and famed roller coasters, while local artist Phil Jarvis was commissioned to hand-paint key PGAV slogans and designs throughout the new spaces. Bryan Haynes’ beautiful lobby murals maintain their place in the lobby.

Other popular, thematic zones include The Aviary, a series of colorful booths with “bird’s eye views” of downtown, especially Busch Stadium; The Aquarium, a blue-green meeting area with colorful space dividers simulating a kelp forest; The Biergarten, a sporty, backyard-style space in reference to the firm’s long-standing client Anheuser-Busch; El Capitan, a “stepped” meeting space featuring a large television, so staff can gather to watch The World Cup and opening Cardinal games; and the global map in the renovated Café, showcasing  where staff have traveled using their annual PGAV GO! funds. “Our nature is to invent cool, thematic environments that immerse you in a culture or a special place, and that’s what we’re doing here – immersing our team and guests in our company culture,” said Howard.

Essential to the 2018 renovation is a long-term vision for growth, which a large, open, ready-for-move-in space supports. Throughout the themed and refreshed meeting spaces – each with its own unique design, intentionally like PGAV’s attraction work – a story evolves of PGAV’s heritage, a celebration of its practice today, and where it’s headed in the future. “In a way, I hope we’re never finished with this renovation – I hope we’re always thinking of new ways to collaborate and to do our work better,” added Howard. “Our immersive HIVE space is an excellent example; with our Visualization Team in its infant years, I can’t wait to see how we evolve to innovate in that field. We’ve given our team the space and tools to thrive and grow – and I’m excited to be part of it all and can’t wait to see what happens next!”

For an inside-look into PGAV’s renovation process, watch their Facebook Live series to explore these new spaces in-depth.

PGAV Destinations is a global leader in the planning and design of unique destinations. Now entering its sixth decade, the practice has evolved to become the ideal destination-consulting partner, skilled at developing growth-oriented master plans and translating those plans into successful projects. For more information, go to www.PGAVDestinations.com.