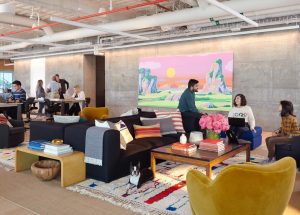 WeWork will lease 60,000 square feet on the 22nd and 23rd floors at One Metropolitan Square, a Class A office tower owned by an affiliate of the 601W Companies.

One Metropolitan Square anchors the heart of the downtown Central Business District at the southwest corner of North Broadway and Olive Street. As the tallest high-rise in St. Louis, One Metropolitan Square boasts 43 stories and 1.5 million square feet of office space and ground-level retail. Its ownership group has invested $2.5 million in recent years to upgrade the building’s amenities to include downtown’s first food hall and a massive 28 x 10 foot media wall in the building’s lobby. Plans are currently in the works to add a tenant lounge this year on the 42nd floor that will feature an open, modern floor plan with seating areas for socializing, a bar, and game tables.

JLL (NYSE: JLL) is a leading professional services firm that specializes in real estate and investment management. JLL is a Fortune 500 company with annual revenue of $16.3 billion, operations in over 80 countries and a global workforce of nearly 92,000 as of June 30, 2019. JLL is the brand name, and a registered trademark, of Jones Lang LaSalle Incorporated. For further information, visit jll.com.